This Day in History: August 10th- Saxons vs. Vikings 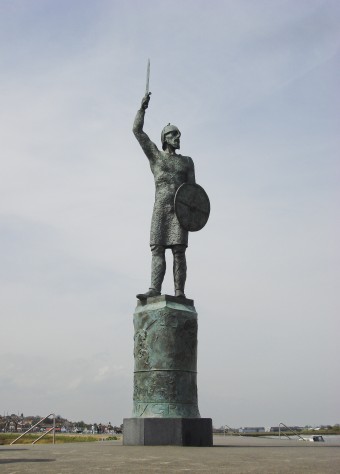 On August 10, 991, one of the best known battles between the Saxons and the Vikings took place in Essex, England near the small town of Maldon by the River Blackwater. It heralded the era of the Danegeld – the practice of paying off the Vikings to avoid future attacks. Aside from government-sanctioned extortion, the Battle of Maldon also inspired one of the greatest Old English poems of all time called, strangely enough, “The Battle of Maldon.”

England had been enduring attacks by Vikings from Norway, Denmark and Sweden since the 700s. Eastern coastal towns were particularly vulnerable. Depending on their ability to defend themselves, English towns and villages either fought back or offered the Vikings bribes of money or land. Unfortunately, engaging in battle just bought temporary peace at best and bribes only encouraged the enemy to return looking for more.

The Battle of Maldon occurred in 991 during the reign of Æthelred the Unready, which gives you a clue how effective a leader his people perceived him as. On August 10, King Olaf of Norway personally came calling with his Viking fleet of approximately 90 long ships carrying between two and four thousand men.

The local Saxon lord Earl Byrhtnōþ gamely led the army of Saxons, gathered from the local households, in battle against the invading Viking hoards. Apparently the Earl had been offered the typical deal of peace in exchange for gold and armor, but Byrhtnōþ retorted “We will pay you with spear-tips and sword blades.” So it was on.

The battle was defined by Byrhtnōþ’s decision to allow the Vikings to cross the estuary to the mainland. Armchair quarterbacks have been debating the reasons for this move for over a millennium, but the consensus is that the Earl intended to whip the Vikings soundly once and for all. He didn’t want to risk the enemy returning home when the causeway flooded with the tide.

Unfortunately, this didn’t work out so great for Byrhtnōþ, who was cut to shreds by a group of Vikings. Once their leader had been slain, most of the Saxons fled, but those who refused to leave the side of their lord are immortalized forever in the form of poetic verse.

“Thought must be the harder, heart the keener
Spirit must be the greater, as our might lessens.
There lies our leader all cut down,
A good man, on the ground. May he regret it forever
Who now thinks to flee from this battle-play.
I am old in years – I will not go from here,
But by the side of my lord,
By the man so beloved, I intend to lie.”

The battle was over, and the Vikings went a pillaging.

After this fiasco, the Archbishop of Canterbury advised Æthelred the Unready to barter peace with the Viking invaders rather than do battle with them. The King agreed, and a payment of 10,000 pounds of silver was coughed up as Danegeld to avoid more attacks. As you may have guessed, this had no long term effect except to make the Vikings richer, and eventually a Viking king, Canute (The Great), would sit on the English throne, along with the thrones of Denmark and Norway, as well as ruling a good chunk of Sweden.