This Day in History: April 13th- We are the World 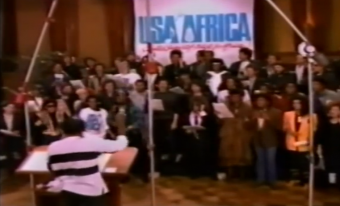 On April 13, 1985, “We are the World,” a song recorded by the Who’s Who of ‘80s music royalty billing themselves as “USA for Africa”, took the number one spot on Billboard’ Hot 100. The single was produced to provide relief for the victims of the devastating famine ravaging Ethiopia. It was the fastest selling single in Billboard history and the first to go multi-platinum.

“We are the World,” written by Michael Jackson and Lionel Richie, came hot on the heels of “Do They Know It’s Christmas?” Recorded by “Band-Aid,” a group of the biggest British pop stars of the day, and produced by Bob Geldolf, the premise and purpose was to raise awareness and funds for famine relief in Africa. It was released in late 1984.

“Check your egos at the door.” Quincy Jones, the producer of the song, preemptively hung this sign outside the studio on the night of the recording session to discourage any diva-like behavior. When you have 46 super-stars used to being the center of attention participating in a group project – well, no-one could blame Jones for being pro-active.

By all accounts, everyone played nice during the recording session on January 28, 1985. In fact, a good time was had by (almost) all. There were moments of hilarity when Stevie Wonder volunteered to show Ray Charles to the bathroom, and everyone watched in wonder as the blind lead the blind. When Musical Genius Wonder missed a note during rehearsal, Lionel Richie got a lot of laughs when he asked aloud “Is that even legal?”

Some of the superstars were meeting their own idols for the first time. When Billy Joel watched his hero Ray Charles enter the studio, he said, “That’s like the Statue of Liberty walking in.” He was shaking all over when Quincy Jones introduced him to Charles by saying, “Ray, this is the guy who wrote ‘New York State of Mind’” (Joel’s homage to Ray.) The two hit it off and later recorded a duet. Ray Charles also inducted Billy Joel into the Rock and Roll Hall of Fame in 1999.

Bob Dylan wasn’t quite as gracious when Al Jarreau introduced himself by saying, “Bobby, in my own stupid way I just want to tell you I love you.” Dylan didn’t even give poor Al a glance and walked away. Dave Breskin of LIFE magazine recounted that Al simply said, “My idol!” and started sobbing.

Dylan may have been too cool to talk to Al Jarreau, but it took Stevie Wonder a million tries and infinite patience to coach Mr. Voice of a Generation through his one lousy line.

By most people’s reckoning, the best part of the song wasn’t even planned. The duet between the gravely-voiced rocker Bruce Springsteen and smooth-as-silk Stevie Wonder gives this song some much needed wow-factor. Even Quincy Jones knew he needed help: “The energy I needed to conclude had dissipated earlier than I had anticipated. The power of the choir had peaked after two choruses and one change of key.” He managed to use their high-intensity call-and-response for a full minute of the single’s run time.

Although the logistics of getting the money the record earned to the people it was intended to help turned out to be a nightmare, and some of the cash was never accounted for, it’s safe to say the people singing all had their hearts in the right place. A good portion of the proceeds got to the famished Ethiopians, and even if only a handful of starving children were fed, the intentions were still noble.