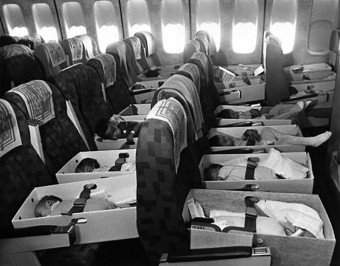 As it became clear that the communists were going to overtake South Vietnam in the closing days of the Vietnam War, fear began to spread about what was in store for those left behind. It was rumored that Vietnamese children fathered by American servicemen would be dealt with especially harshly by the NVA. Thus, President Ford initiated “Operation Baby Lift”, which transported more than 3,000 children out of South Vietnam bound for adoption in the US, Canada, Europe and Australia. Many South Vietnamese mothers jumped at the chance to save their mixed-race children by helping them escape their war-torn country.

Not everyone thought it was such an altruistic, well-meaning idea though. Some saw it as a last desperate attempt to garner sympathy for a highly unpopular war. Some Americans posed the question whether the fear of communism justified snatching children from their country.

On the other hand, Sister Susan McDonald, who worked in a Saigon orphanage, reported that supplies were dwindling as the North Vietnamese advanced closer to Saigon. The children’s lives were in jeopardy, and she had been frantically trying to secure them commercial flights out of the country. When given the chance to participate in “Operation Baby Lift”, she was grateful the children in her care would be taken to safety.

Unfortunately, not all the children made it. During the first of the Baby Lift flights on April 4th, the Air Force cargo jet crashed shortly after take-off. Approximately 130 out of the 313 passengers lost their lives, including 78 children.

After an investigation, it was determined that the cargo door locks on the plane had not engaged correctly due to having been improperly fitted during recent maintenance of the craft.  As a result, once the pressure differential from inside the plane to out increased enough, the locks that did engage correctly failed and the cargo door blew open.

Captain Dennis Traynor and Captain Tilford Harp ultimately were able to guide the plane to the ground despite significant phugoid oscillations, limited control, and the plane having to be landed under power in a rice field.  For their quick thinking and the exceptional piloting skills exhibited during the crash landing, which allowed almost half of those aboard to survive, the pair were each awarded the Air Force Cross.

This nightmarish scenario played out as the NVA closed in, and as each new, exceptionally packed flight with more children took off, those aboard worried about getting shot down or potential sabotage; at the time, it was thought the previous crash may have been caused by saboteurs.

In the end, all subsequent flights transporting more than 3,000 children were a success, with the last “Operation Baby Lift” flight leaving South Vietnam on April 14, 1975.

Of course, this wasn’t the end of the road for the children. As it turned out, many of the children air-lifted out during those last chaotic days of the war weren’t orphans at all. It was a common practice in Vietnam for poor families to place their children in orphanages until they could better care for them. They often visited their kids and had every intention of returning for them when their circumstances improved. For some parents, their children being included in Operation Baby Lift was decidedly without their consent.

Some other parents put their children on the Baby Lift flights intending to find and reclaim them at a later date when they could arrange to leave Vietnam as refugees. But conditions were hardly orderly and organized in Vietnam in those last days of the war. As Bobby Nofflet, a worker with the U.S. Agency for International Development in Saigon remembered, “There were large sheaves of papers and batches of babies. Who knew which belonged to which?”

Lawsuits were filed claiming the children had been handed over under duress, and that the US was obligated to return the children to their birth parents. The Baby Lift case was eventually thrown out of court, as the judge ruled it was not a class action suit, but rather 2,000 distinct cases.