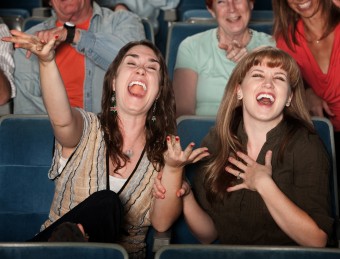 The word “claque” is derived from the 16th century French term “claquer”, which roughly meant “to clap”, and is largely used to refer to a group of individuals hired to give a pre-determined response to a performance, be it positive, negative or anything in between. Individual members of a claque are generally referred to as “claquers” or “claqueurs” and for a brief but significant window in the 19th and early 20th century, they basically controlled how an audience would react to a given play, beginning in Paris and spreading from there.

The idea of coercing members of an audience to react a specific way has been around almost as long as we have records of audiences.  One famous example of this from antiquity was Roman Emperor Nero who used to assure ravenous applause from audiences by having many of his soldiers attend, and cheer at, his performances. (And, note: Nero did not “fiddle while Rome burned”. All evidence indicates he acted exactly how an administrator should in that situation, even opening up his own estate to those made homeless by the fire.)

Fast-forwarding a bit in history, a 16th century poet named Jean Daurat was one of the first known individuals from more recent times to expand upon the idea of incentivizing people to cheer for a performance. He enlisted the help of a bunch of friends who he gave free tickets to one of his plays with the understanding that they would cheer at appropriate times.

From here, claquers became more and more popular with playwrights, aspiring actors looking to make a name for themselves, and theatres until eventually a man known only as M. Sauton decided to capitalize on the trend by opening a professional claquer service in 1820, the first of its kind in the world. The closest someone had come to organising so many claquers before this had been in the mid-18th century when a poet known as Claude-Joseph Dorat organised a small but loyal group of people who’d cheer on command and began to loan their services to friends. However, there is no record that it ever occurred to Dorat to charge for the services of his claquers outside of allowing the individuals into the shows for free.

Through Sauton’s office in Paris, a theatre or individual could order anywhere from a handful of well-placed plants to a large audience full of enthusiastic supporters to fill out empty seats or bolster the desired reaction to a début play or performance in order to influence subsequent reviews.

Unlike the claquers of years past (and in more modern times) who were mostly comprised of friends and family, Sauton’s claquers were ultra-professional and you could quite literally hire a claquer capable of demonstrating any emotion on the spectrum on cue. For example, claquers known as “rieurs” were masters of laughing and were often hired to give a comedy a shot in the arm. “Pleureuses” were individuals known to be adept at the whole spectrum of crying, from a simple dab of the eyes with a handkerchief to full-on weeping, depending on what was appropriate for a particular portion of a performance. These individuals would be hired to pad the audience of a drama or opera. There were even “bissuers” whose job it was to simply cheer wildly at the end of a performance while calling for an encore.

To keep claquers in check and as valuable as possible to performers, Sauton also employed a number of individuals charged with both supervising claquers and liaising with theatre staff. These chefs de claque (Leaders of Applause) would study given plays extensively, even meeting with actors and stage managers to work out the optimum placement for claquers and exactly when and how they should react and with what level of enthusiasm.  Essentially, the chefs de claque’s job was to direct the professional audience’s performances.

As you’d expect, it didn’t take long for claquers and the people leading them to realise that they could supplement their income by simply threatening actors or theatres that they’d turn up to every performance and boo unless they were paid off. This, in turn, led to an entire secondary industry of claquers who specifically went around extorting money from people in return for not turning the audiences against the performers.

Professional claquers were a popular thing right up until the early 20th century where, as noted in this newspaper clipping from 1902, their work had turned into a bizarre sort of performance theatre in and of itself; for instance, women strategically seated in the front row who were paid to faint, working in tandem with men trained to rush heroically to their aid with immaculately pressed handkerchiefs at the crescendo of a performance. Many of these neo-claquers were often aspiring actors themselves looking to score free tickets to plays and test out their ability to emote on command.

While use of professional claquers has mostly gone the way of the Dodo bird, there is one exception- Russia. As detailed by the New York Times, the world-famous Bolshoi Theatre of Russia is home to an expansive network of modern day claquers who operate under the careful supervision of a ballet-mad man called Roman Abramov.

Like his forebears, Abramov has been known to use his expansive connections to annoy performers who’ve displeased him or spoken ill of his services. By his own admission, he has made ballet dancers fall flat on their faces by getting people to clap out of rhythm or cough loudly or the like at key moments to distract the performers. This is something he has since heartily apologised for after a bout with a heart attack made him rethink certain aspects of his life.

While Abramov’s actions coupled with the history surrounding the profession of paid applause might leave a sour taste in many people’s mouths, Abramov’s reasoning for starting his claquer service are remarkably noble. According to Abramov, he was upset with how exclusive the Bolshoi had become which had seen ordinary Russians citizens, people who’d grown up with and formed a deep love of the ballet in the time of the Soviet Union, priced out of experiencing it, often with tourists making up the bulk of the audiences as they are the only ones that can afford it. So, he started his business so that these kinds of people could experience the ballet without spending what would otherwise be an impossible amount of money for them to obtain. In return for these extremely expensive tickets, dancers get diehard fans who will cheer with genuine enthusiasm at their performances.