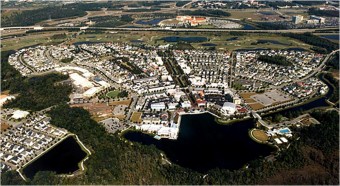 The town of Celebration was first loosely imagined by Walt Disney himself, though the current town differs wildly from Disney’s original idea. Whereas Disney pictured a “perfect” futuristic city where technology blended seamlessly with real life and all possible needs were taken care of, an idea that served as the basis for the Epcot theme park in Disney Land, Michael Eisner (the CEO of Disney at the time it was built) instead visualised Celebration as a quintessentially classic American town, a nostalgic holdover from a purportedly (see Bonus Facts below) better time in history. 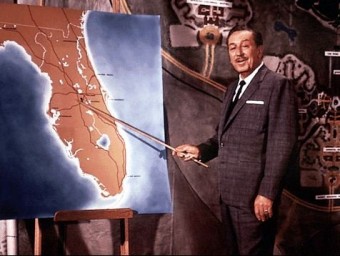 While Celebration didn’t exactly conform to Walt’s original plans for a futuristic city housed beneath a cool dome, it was conceived with his idea of creating a perfect, utopian society firmly in mind, looking with a giant set of rose-coloured glasses to the past instead.

Built just a few miles away from the Magic Kingdom on land that was originally used to dump alligators, Celebration was designed from the ground up to be “perfect” and the company spared no expense, spending some $2.5 billion making sure that everything fell in line with their vision. Disney hired some of the world’s foremost architectural minds to design each building in the town, inviting renowned architects like Robert Venturi and César Pelli to design buildings even as humble as banks and post offices. In addition to this, Disney also hired urban planning experts and graphic designers to oversee where these buildings went and how they were decorated. For instance, the graphic design firm was tasked with creating signage that could be displayed around the town that didn’t convey a sense of branding. Disney was so impressed with this work that they went on to hire the same company to design such trivial things for the town as manhole covers and the arrows you see on signs telling you which way to walk around the town’s park.

On that note, perhaps the most jarring thing about Celebration was that for many years there was no branding of any kind, anywhere in the town. Celebration had no billboards, no franchises and no advertising. Ironically, this is something Disney, one of the biggest mega-brands on Earth, used to sell the idea of the town to potential residents when it first opened in the mid-1990s.

When it opened, demand for properties in the development were high, so much so that Disney had to hold a drawing which required a deposit of a thousand dollars just to see who could speak to their salespeople first when homes first started being auctioned off in 1995.

Over the next few years, prices slowly dropped in Celebration and today they’re roughly in line with the average house prices in the region. As for how many people live there, according to the most recent available census from 2010, the town is currently home to 7,247 residents. However, Celebration’s official website lists this figure as being closer to 9,000. In terms of demographics, the town is made up of about 90% white residents (compared to about 58% in surrounding areas) with almost no single people living in the town, which may have something to do with the “Declaration of Covenants”.

The Declaration of Covenants is an amazingly detailed 166 page document prospective residents of Celebration have to sign agreeing to adhere to a number of rules when they move in. These rules include things like how you can park your car in your drive way; how big your bushes are allowed to be; what kind of compost you’re allowed to use; how much bark must be around certain plants at all times; a rule preventing more than two people from sleeping in the same bedroom; and a rule stipulating that a pet can be removed from the community without the homeowner’s permission if it’s deemed to be a “nuisance”, among an amazing number of other restrictions that would make even the strictest of HOA’s elsewhere blush. Of course, as Eisner said when Disney opened the town, “The first principle of Celebration is that no one is actually required to live here.”

As you might imagine from all this, many residents and visitors have said the town feels very Truman Show-esque and that it’s so well designed that it comes off as looking artificial.

Speaking of artificial, the lengths Disney went to when designing Celebration to make it look like the “perfect” town is nothing short of astounding. Plastic trees housing speakers that blast muzak from the 1940s and 1950s are found across the town. In winter, fake snow, nicknamed “snoap”, is dropped regularly. Dead leaves are imported each autumn to make the town look more picturesque. There were even rumors in the 1990s that Disney hired actors to walk around the town just to make it look more inviting to prospective buyers.  Disney also attempted to get people to regularly hold get-togethers on their porches, with such events as “lights and lemonade” nights, but these sorts of efforts were mostly failures.  As one resident noted, “Society’s not like that. People wanted to sit indoors and watch TV instead.”

In 2003, Disney auctioned off much of the developed parts of the town to a private buyer, partially eliminating its stranglehold; by 2004, the majority of the town was no longer owned by the Disney corporation. This was much to the chagrin of many living in the town who feared this rose-colored time capsule of a town would turn into a suburb like any other without Disney at the helm. This is something that hasn’t yet happened even a decade later, partially thanks to the Declaration of Covenants that is still in place and that the residents themselves fight any such change tooth and nail.