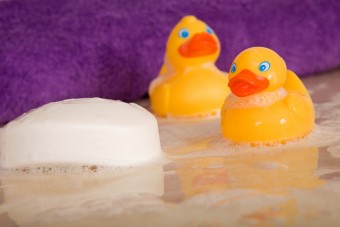 Ivory has been producing their uniquely floating soap for the well over a century now and in that time they’ve become one of the most popular soap brands in the world. For many years, the company has maintained that the discovery of its trademark floating soap was a complete accident, but exactly how true is this?

For those of you who aren’t familiar with Ivory brand soap, in a nutshell its two key selling points are that it is incredibly pure (99.44% pure) and that it floats, making it superior to all other kinds of soap because you don’t need to grope around on the bottom of the bath to find it. These two traits have made Ivory soap one of the most popular and enduring brands and both features have been played up to by the company itself in its advertising for almost as long as it has existed.

If anyone is curious about why Ivory soap floats, the soap is produced in such a way as to ensure air is whipped into the soap mixture before it sets; as a result, the final product contains numerous tiny air bubbles which work together to make the soap ever so slightly less dense than water, allowing it to float. These air bubbles also serve a dual function of making the soap produce a more consistent and bubbly lather when used, another fact the company has historically drawn attention to in its advertising. Something you can easily see for yourself by popping a bar of Ivory into your microwave; you know, for science.

As for how this discovery came about, for over a century, Ivory has insisted that the invention of floating soap was a happy accident that occurred as a result of an unnamed employee accidentally leaving a batch of soap mixture to mix for too long while he was on his lunch break. The story continues that when the employee returned and realised his mistake, he reasoned that since nothing new had been added to the mixture, there was no reason to throw out the batch.

In some versions of the story, the employee told his manager about the mistake, who came to the same conclusion. In both versions of the story, the mixture was then sent to be set and cut into bars at which point it was promptly forgotten about. That was until a few weeks later when orders began flooding in for “floating soap” which confused the workers at Ivory who had no idea such a product existed, let alone that they sold it. After receiving dozens of orders for this mythical product, the company conducted an internal investigation until the tainted batch was found, at which point they came to the realization that the extra mixing must have added air to the mixture, making the soap light enough to float.

While this may sound a little too convenient, there are well documented cases of such happy accidents happening. For example, artificial sweetener was discovered because a researcher ate a sandwich after forgetting to wash his hands; Super Glue was invented by accident, not once, but twice;  the Slinky was originally supposed to be used as a tension spring in horsepower meters in battleships before the inventor accidentally knocked one off his desk… the list of famous accidental inventions goes on and on and on. And as Ivory has insisted that that’s how it happened for 12 decades or so, case closed right?

Perhaps the first tip-off should have been the “unnamed employee.” These sorts of stories that are vague on specifics on names and dates while overly detailed and elaborate on the rest often tend to be false or wildly exaggerated.  But the nail in the coffin came in 2004, when this accidental floating soap origin story was officially debunked. In a strange twist, it just so happened to be debunked by one of Ivory’s own archivists while they were researching for a book about the history of Proctor & Gamble Co (the company that owns Ivory). According to the archivist, a notebook from 1863 was found, in which a chemist working for P&G nonchalantly noted, “I made floating soap today. I think we’ll make all of our stock that way.”

But here’s the weirdest part, the chemist who made that discovery was none other than James Gamble, the son of the man who co-founded the company, James Gamble Sr. Yet, somehow, the fact that he invented one of the company’s most famous and enduring products was forgotten about for over a century.

Although Gamble discovered the process to make soap float way back in 1863 and seemingly had plans to “make all our stock that way”, the idea was shelved for quite some time, further demonstrating that the eventual launch was purposeful, not accidental. The first bar of Ivory floating soap sold to consumers happened in 1879, advertised from the beginning as the soap that floats.