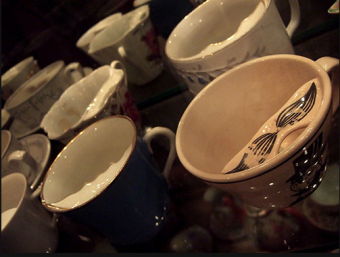 Beyond being a staple of any self-respecting peace officer, thanks to the popularity of things like Movember, the humble moustache has made a glorious, bristly return to the faces of men all over the world in recent years. As a result, there is an almost endless supply of moustache related products one can buy, which means it’s only a matter of time until the moustache cup once again becomes relatively commonplace.

“What’s a moustache cup”, you say? The moustache cup is a cup designed with a small lip on the inside intended to protect the drinker’s face fuzz from whatever beverage they happen to be drinking. Despite sounding like the kind of joke gift you’d get a moustachioed co-worker for secret Santa because you don’t know them that well, the moustache cup was something people took very seriously once upon a time and it’s noted that pretty much every self-respecting gentlemen in the mid-to-late Victorian England with a mouthbrow owned at least one.

If you’ve ever taken a glance at portraits from the 19th century, you’re probably aware that huge moustaches were very popular with gentlemen of the era. In fact, from 1860-1916, the British military actually required all of its soldiers to sport a moustache for the authority it imparted to the moustachioed man. Not surprisingly from this, gentlemen ultimately came up with a number of ways to make sure that their lip warmers were as gloriously trimmed and maintained as possible. One of the more popular ways to style a moustache during this time was to use wax, some men also liked to dye their moustache to give it a more vibrant appearance.

The problem with both of these methods of moustache maintenance was that neither held up well to hot liquid- dye would run and wax would invariably melt and cause unsightly moustache droopage the second it came into contact with something like hot tea or coffee. Enter the moustache cup which is generally thought to have been invented by an English potter named Harvey Adams sometime between 1850 and 1860. The moustache cup allowed a magnificently moustachioed man to safely sip on a cup of steaming tea without it getting wet or contaminating his tea. So when Adams first introduced the moustache cup in Staffordshire, they proved to be a hit with the social elite, causing a wave of copycat products to hit the market.

Although moustache cups are also known to have been very popular across the pond, finding a surviving specimen with a “made in America” mark on it is incredibly rare. This is not so much a reflection on their popularity in America, but because early American manufacturers would commonly falsely claim that the cups they produced had been made in England due to the high demand for English ceramics in the states at the time. Surviving left-handed moustache cups are also noted to be very hard to find and even when the popularity of the cup was at its peak, left-handed individuals usually had to make do with a portable moustache guard that could be fitted onto either side of an ordinary cup.

By the turn of the 20th century, the invention of the safety razor led to a change in grooming habits that made moustache cups obsolete for the vast majority of men. As a result, production and sales of moustache cups slowly dried up. By 1930, this formerly commonplace item was almost unheard of.