February 19, 2015 Karl Smallwood
Jim R. asks: Is it true that the word jumbo came from the name of an elephant? 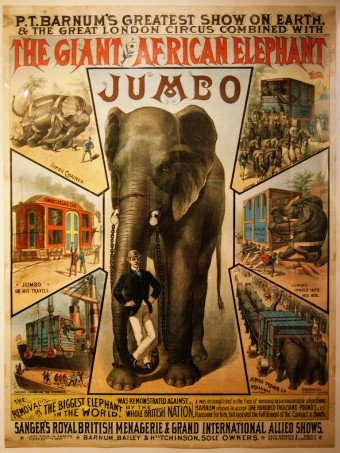 The word “jumbo” can roughly be understood to mean “a large specimen of its kind” and it’s often posited that the word entered the English language thanks to an elephant. While this is certainly a nice story, the truth is a little more complicated.

First things first, though etymologists are in agreement that the word “jumbo” in specific reference to something that is quite big was popularised by an African bull elephant called Jumbo, there is evidence that the word existed long before he was even born.

In the latter half of the 19th century, Jumbo the elephant was arguably one of the most famous animals on Earth. Throughout his life as a zoo attraction and later a circus performer, he is estimated to have been seen by several million people. While nobody is exactly sure when Jumbo was born, it’s believed that he was captured as a young calf in 1860 somewhere in East Africa after his mother was shot by hunters. In 1862, after travelling hundreds of miles on foot and by boat, Jumbo was sold to a large botanical garden in France called the Jardin des Plantes.

Jumbo’s life at the Jardin des Plantes was reportedly not so great; along with awful conditions, Jumbo was constantly overshadowed by the garden’s two other elephant attractions, Castor and Pollux (who are themselves famous for being eaten during the 1870 Siege of Paris). In 1865, Jumbo was sold to the London Zoo after years of negotiations spear-headed by the zoo’s Superintendent, Abraham Bartlett. Bartlett had supposedly been very annoyed to learn that the French had managed to get their hands on the first African elephant specimen to set foot in Europe; so much so that he eventually agreed to send the Jardin des Plantes the following list of animals in return for the calf:“A rhino, a jackal, two eagles, a pair of dingoes, a possum and a kangaroo”.

When the young elephant finally arrived in London, Bartlett immediately recognised that it had been poorly looked after and handed its care off to his most talented zoo-keeper, Matthew Scott. Scott, who was noted as having a knack for understanding animals, quickly bonded with the elephant and under his expert care, Jumbo eventually grew to become one of the largest elephants the world has ever known, standing at an impressive 12 feet tall in his prime (later advertised as over 13 ft. tall).

Jumbo’s massive size and gentle temperament eventually led to him being bought by legendary circus owner, P.T Barnum in 1882. The sale of Jumbo caused a considerable stir in England and the London Zoo was heavily criticised by the public for daring to sell him. You see, during his time at the London Zoo, Jumbo had become quite a celebrity and boasted such high-profile fans as Queen Victoria, who personally petitioned the zoo not to sell him. The zoo, however, were worried about Jumbo entering what is known as “musth“, a condition that can affect bull elephants resulting in an increased production of testosterone and unpredictable, violent behaviour. Jumbo’s sheer size meant that if he entered musth, he could have quite literally destroyed the entire zoo if he felt like it. He had proven before that he was more than capable of destroying the doors to his cage and the chains that were supposed to hold him in place; so the zoo decided that it simply wasn’t worth the risk.

Once he got to America, Jumbo’s arrival was milked for all it was worth by Barnum who had his image emblazoned on everything he could find. Jumbo proved to be one of the most popular attractions at Barnum’s zoo and he was billed by the entrepreneur as “The biggest elephant in the world“. Sadly, just 3 years later, Jumbo was killed after being struck by a train and dragged along for about 300 feet before the train came to a stop.  Reportedly, as he was taking his dying breaths, he used his trunk to hold the hand of his long-time trainer.

Ever the showman, expert marketer, and businessman, Barnum had Jumbo’s remains preserved and toured with them for many years.

Back to the topic at hand. While it’s true that Jumbo was a humongous specimen, even by elephant standards, and also that after his death his name came to be synonymous with anything large, the word jumbo existed long before he did. As early as 1823, the word “jumbo” was a slang term used to describe: “a big, clumsy person, animal or thing.”

Unfortunately, we’re unable to trace the meaning back much further than that because it originated in slang speech, which is so often notoriously poorly documented. One origin theory posited by a slang dictionary published in 1823, with possibly the longest title of any dictionary in history (80 words), is that it perhaps derived from the phrase “mumbo-jumbo”.

Mumbo-jumbo, which many of you will likely understand as a synonym for something that is meaningless or intentionally convoluted and confusing, derives, according to the Oxford English Dictionary, from “the name of a grotesque idol said to have been worshipped by some tribes,” often claimed to have been called Maamajomboo. It’s believed the word was adopted by the English language during the 18th century and that it may have been used as a derogatory term to refer to the so-called “incomprehensible” languages used by Africans. How the singular word “jumbo” came to be derived from this phrase isn’t precisely known.

As for how Jumbo the elephant got his name in the first place, this is similarly not known. One theory is that Jumbo was given his name by Abraham Bartlett who reportedly just liked the sound of the word, evidenced by the fact that he once called a gorilla “mumbo”. Another theory is that it was actually Jumbo’s trainer and handler, Matthew Scott, who named him “Jumbo” after the slang term because of his clumsy gait and heavy-set frame.