This Day in History: February 5th- The Dueling Dandies 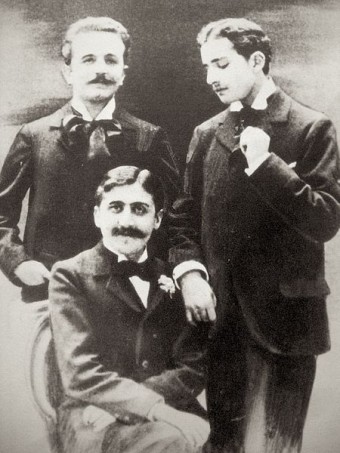 It all began when the gay literary critic Jean Lorrain accused author Marcel Proust (also thought to have been gay) of having a homosexual relationship with the son of one M. Alphonse Daudet, Lucien Daudet (pictured right). Proust demanded satisfaction for the accusation that he had a tryst with Daudet, and challenged Lorrain to a duel. Yes, this was two gay men dueling over the suggestion that one of them was gay.

Proust threw down the gauntlet, and the famously asthmatic author showed “a coolness and firmness, for three days prior to the duel, which seem incompatible with his nerves.” His friend, Reynaldo Hahn, recorded in his journal that the respect of his peers was invaluable to Proust, and the attack on his character made it easy for him to stand his ground.

The author certainly took a certain measure of pride in his behavior. When his character was called into question any time after the duel, he would point out his actions at that time. He wrote in 1904: “I remember when I fought with M. Lorrain, a time when I had not yet set the day, but I was already there in my morning coat, ready, my only concern was that the duel did not take place before noon.”

In others words, I was so cool under pressure all I cared about was not having to get up early. Go Proust.

The official arrangements for the duel were made, with it being agreed it would be held at the traditional dueling spot of Paris, the forest of Meudon, on February 5, 1897. The weapons would be pistols shot at a distance of 25 paces.

The day of the duel was cold and rainy. The two well-heeled dandies took their positions, faced one another, and drew their pistols.

Proust took his shot first. The bullet hit the ground next to Lorrain’s foot. Lorraine then took aim and fired. His bullet went wide of his mark. But two bullets had been exchanged, and the witnesses agreed that with this meeting, Proust’s honor was restored. Proust and Lorrain would continue to hate each other, but this particular issue and the duel that followed, which was reported on in the newspapers, had been publicly laid to rest once and for all.

For the history of literature, it turned out to be a very good thing that Lorrain was such a lousy aim, as Proust would go on to write what is considered one of the great novels of all time, À la recherche du temps perdu.