This Day in History: February 25th- A Rebellion Too Far 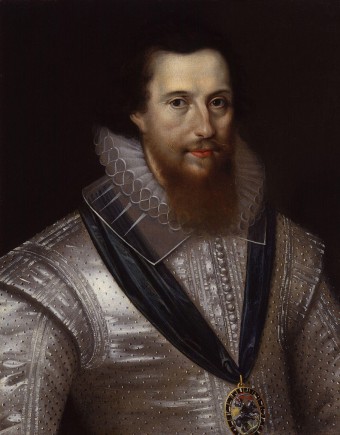 On February 25, 1601, the last great favorite of Queen Elizabeth I, the 2nd Earl of Essex Robert Devereux, was beheaded at the Tower of London on Tower Green for high treason. His inevitable trip to the block had been brewing for quite some time.

Queen Elizabeth first met the tall, handsome and charming Devereux in 1584 through his step-father, her life-long companion Robert Dudley, Earl of Leicester. Essex was 21. The Queen was 53. (Essex was also the great-grandson of Mary Boleyn, sister of Anne and Elizabeth’s aunt.)

After Dudley’s death in 1588, the dashing rogue amused the aging Queen by playing cards and dancing with her. Some thought he was over-familiar with her Majesty, and was especially disliked by a faction at court led by Lord Burghley. They were just waiting for Essex to screw up. He gave them plenty to work with.

When the Queen refused to grant him a request in 1598, Essex turned his back to her, an unimaginable show of disrespect to the sovereign for which Elizabeth boxed his ears. He immediately went for his sword, but another courtier stayed his hand. Essex stormed off bellowing how he would not have withstood such treatment even from Elizabeth’s father, Henry VIII. Incredibly, the Queen forgave him for this brazen display of lèse-majesté.

After a disastrous military campaign in Ireland where he made a deal with the Irish leaders and returned to England without the Queen’s permission, even Elizabeth was beginning to tire of the Earl’s headstrong behavior. She really lost her patience with the obstinate Essex in September 1599 when he walked into her bedchamber unannounced, and caught the notoriously vain queen sans make-up or wig.

Queen Elizabeth put Essex under house arrest for a spell, but even that wasn’t enough to make him dial it back a bit. Instead, he planned a rebellion.

On February 8, 1601 Essex left his home, Essex House with over 100 supporters. They made their way into London, calling upon the people to come and rise up in his support. The people prudently had better things to do, and Essex scooted back to Essex House with his tail between his legs. Almost immediately soldiers arrived to escort Essex on that inevitable trip to the Tower.

The Queen was done with the Earl’s antics; his downfall was both swift and sure. Convicted of high treason, Essex was sentenced to the horrible death of hanging, drawing and quartering. Still harboring a soft spot for her tempestuous lad, she commuted his sentence to the more merciful death by beheading (though his execution took three blows with the axe, so that had to smart.)

He showed more humility in the last minutes of his life than he had probably shown in all that years that had gone before it. As he stood on the scaffold just before eight in morning on February 25, 1601, he conceded, “that he was justly spewed out of the realm,” and lamented, “My sins are more in number than the hairs on my head. I have bestowed my youth in wantonness, lust and uncleanness; I have been puffed up with pride, vanity and love of this wicked world’s pleasures …”

He asked God to protect the Queen and grant her a long reign, and insisted “whose death I protest I never meant, nor violence to her person.”

He adjusted himself on the block, recited two verses of Psalm 51, and called out: “Executioner, strike home!”

Queen Elizabeth knew what Essex had done – try to turn her people against her and “touch her sceptre” – was unforgivable. But she still often missed the young buck who had kept her feeling young in her last years.