This Day in History: February 24th- The Triple Execution That Resulted in 30 Deaths 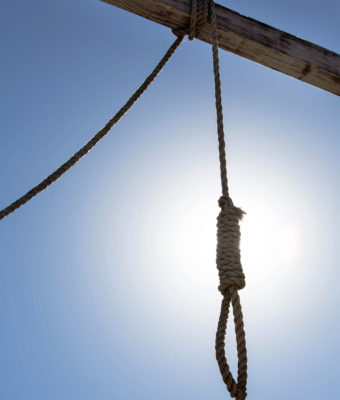 Just a few days before Christmas 1806, a 34 year-old woman named Elizabeth Godfrey rented a room in a house of ill-repute (tsk-tsk) in the Marylebone section of London. Living next door was a coachman named Richard Price, who resided with a woman named Emily Bisset.

Elizabeth was very angry at Richard, apparently for sending the watchman, William Atkins, to arrest her for having a gentleman caller (perhaps a customer) to her room the previous evening. They had a shouting match, and Richard allegedly cut Elizabeth’s hand during the incident. No criminal charges were brought against either party.

Apparently Elizabeth was still pretty ticked off, because on Christmas Eve she knocked on Richard’s door and tore into him again about ratting her out to the watchman. This time, however, it was her turn to do the cutting, when she stabbed Richard below his eye with a pocket knife. Emily took him to the hospital, where he died of his injury on January 18th.

Elizabeth had already been arrested and charged with wounding Richard Price, but that was now upgraded to the much more serious charge of murder. She didn’t have much of a case. There were witnesses to both altercations, and the surgeon who treated Richard testified he was certain the stab wound caused his death.

It was impossible for Elizabeth to argue self-defense. Too much time had passed between the reported incidences of Price stabbing her hand and of Godfrey stabbing him in retaliation. She was convicted of willful murder and sentenced to hang with two other condemned prisoners, John Holloway and Owen Haggerty, on February 24, 1807.

The execution of these three murderers attracted quite a bit of public interest, and an estimated 40,000 people turned up outside Newgate Prison and the Old Bailey. With this many people crammed into every inch of space, things were getting out of hand even before the execution commenced.

And so it was that, as the three felons died on the gallows above, many more were being crushed –and dying – in the crowd below. Men, women, and children were trampled as they fainted under the sheer pressure of the crowd around them, and cries of “murder! murder!” arose from the desperate victims. Helpless officials looked on, powerless to help the injured in the densely packed mob.

It was only after the lifeless corpses of the executed were cut down, the gallows removed, and the crowd dispersing that much needed medical attention could be administered to the injured. All total, 27 bodies were recovered from the scene, while another 70 people sustained injuries requiring treatment. A make-shift mortuary was set up at nearby St. Bartholomew’s Hospital, so people could come and identify their loved ones.

The hospital held an inquest into the tragic incident the next day, which concluded very quickly that same Friday with the no-brainer verdict: “that several persons came by their death from compression and suffocation.”