February 20, 2015 Sarah Stone
Denny G. asks: Why do baseball managers wear the team’s uniform instead of a suit or something like that like you see in other sports? It especially seems weird because managers in baseball seem to universally let themselves go after their playing days are over and tubby old men do not look good in sports uniforms! 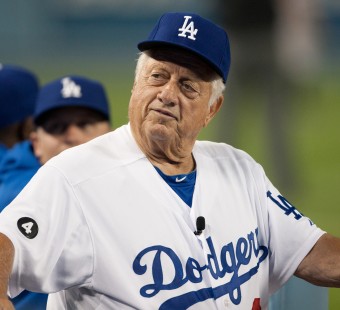 Football coaches wear clothes bearing their team’s logo thanks to the NFL’s push to sell more merchandise. Basketball coaches stand on the sideline in collared shirts and blazers looking for a neat, professional look. And then there are baseball managers who dress in the team uniform, as if they are planning on joining their players on the baseball diamond. Despite that today’s managers are universally beyond the point where they could play at a level worthy of putting them in the field, the tradition of them wearing the team uniform dates back to a time when that’s exactly what they did.

Specifically, the position that managers hold today used to be typically held by the team captain. This person was a player responsible for making decisions about plays on the field during the game. He wore the team uniform because he often took to the field to play alongside his teammates. 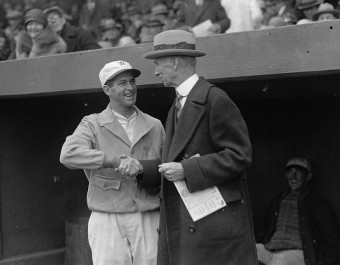 Over the course of baseball history, managers gradually stopped going onto the field to play alongside the men that they coached. As this happened, contrary to what you see today, a few of them began to distance themselves from the tradition of wearing a uniform. Instead, they wore suits while managing. In fact, famed manager Connie Mack wore a business suit for each of the fifty years that he managed the Athletics. A former manager of the Brooklyn Dodgers, Burt Sutton, also shunned his team’s uniform. But this wasn’t the norm and their idea for how a team manager should look failed the test of time.

John Thorn, the official historian of the MLB, has his own take on why this is the case. “Maybe it’s just a testament to the notion that, no matter how old you get, between your ears you think that you’re a baseball player.” After all, the body gets old, but so often, particularly if those you hang around are younger (and in this case incredibly athletic), the mind still feels like you’re young and vibrant as ever.  Many MLB managers also have been wearing a baseball uniform since they were little kids, so it may just seem more comfortable for them, despite their expanding girths.

As for the official rules on uniforms, we have Rule 1.11, Section a, number 1 and 3 where it states: “All players on a team shall wear uniforms identical in color, trim and style… No player whose uniform does not conform to that of his teammates shall be permitted to participate in a game.”

The official rulebook further goes on to state in Rule 2 that “A COACH is a team member in uniform appointed by the manager to perform such duties as the manager may designate, such as but not limited to acting as base coach…” Also in Rule 2, “THE MANAGER is a person appointed by the club to be responsible for the team’s actions on the field, and to represent the team in communications with the umpire and the opposing team. A player may be appointed manager.”

That said, there is one references in the rulebook that could be interpreted as managers being required to wear the team’s uniform, found in Rule 2 where it states a,  “BENCH OR DUGOUT is the seating facilities reserved for players, substitutes and other team members in uniform when they are not actively engaged on the playing field.”

Managers would presumably be considered “team members” even though that is not specifically defined in the rule book. Since they certainly spend a lot of time in the bench or dugout during the game, and the team members there are explicitly required to be in uniform (and there is no mention of the manager being allowed in the dugout otherwise), then it would follow that managers should be in uniform too.  However, when defining coaches, as mentioned, the rule book explicitly states “is a team member.”  The manager, on the other hand, is defined “is a person…” So perhaps assuming managers are team members by the official rule book definitions is not correct.

Moving on, in rule 4.07 it also states that, “When a manager, player, coach or trainer is ejected from a game, he shall leave the field immediately and take no further part in that game. He shall remain in the club house or change to street clothes…” also implying the manager should be wearing special attire while managing, though it’s not clear from this whether this is just supposed to adhere to the general MLB dress code or requires the manager to wear a uniform.  And since it’s been a long time since any manager tried to wear something like a suit, which certainly is within the bounds of the MLB dress code, it’s not clear what officials would do if a manager tried wearing that during the game instead of a uniform as tradition dictates.  As noted, in some instances, the rulebook seems to go out of its way to imply the manager is not required to wear the team’s uniform, while in the definition of a “bench or dugout” perhaps implying they should, hinging on whether they are officially considered team members by the rule book’s definitions.

Of course, a player can also be the manager or designated such, in which case they are required to wear a uniform, but it’s been a few decades since the last time that happened when Pete Rose had a stint as a player/manager for the Reds starting in August of 1984 through his retirement as a player in 1986.

So, in the end, as to how this all got started, it would seem originally individuals who did the job of managers today simply wore the uniform because they also were players, or at least started out that way in many cases, and later it just became a tradition. And baseball is, perhaps more so than any other major sport, all about tradition and fighting tooth and nail before changing the way things have always been done.

After all, even the MLB Hall of Fame still honors Abner Doubleday by displaying an oil painting of Doubleday, despite the fact that he had nothing to do with baseball at all and this fact is well-known and conclusively proven.  Two blocks from the Baseball Hall of Fame in Cooperstown (where Doubleday was said to have invented baseball, which is why the Hall of Fame was put in this backwater town instead of a place more accessible to fans), there is also a “Doubleday Field” which annually features various Hall of Famers and retired MLB players playing an exhibition game there on Father’s Day weekend. These and many other baseball honors for a guy whose own obituary stated he was a man “who did not care for outdoor sports.” This is, funny enough, the only documented instance of him being connected to sports in any way, despite the amazing amount of documentation on the man’s life thanks to the journals he kept and news reports covering the famed General. But, you see, tradition says he invented baseball, so here we are. (And if you’re curious: Why Did People Think Abner Doubleday Invented Baseball?)