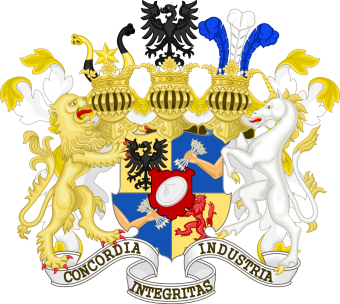 Who was the wealthiest person in every century? That was a question we tried to answer in a previous TIFO article. While it was an incredibly difficult question to get definitive answers to, it did reveal that the wealthiest private entity in the 19th century was actually not a person – but a family. The Rothschild family, descendants of Mayer A. Rothschild, is still around today and is believed to be worth over a trillion dollars combined, thought to be the largest private fortunate in the history of the world. Who are the Rothschilds exactly and how did they amass this tremendous fortune?

Mayer Amschel Rothschild, the patriarch of the Rothschild fortune, was born in 1744 in a Jewish ghetto in Frankfurt, Germany. When his father passed away, Mayer was still young, but he took over the family’s currency-exchange business. The work required Mayer to know a lot about different kinds of money, currency, and coins and, soon, he became an expert in rare and old coins. To supplement the business, he became a rare coins dealer.

Now, it just so happened that the Crown Prince of Hesse (a territory in Germany) was an avid rare coin collector. Upon hearing of Mayer’s immense collection, he approached him and they made several deals. The deals went so favorably that in a matter of years, when the Crown Prince became William IX, Landgrave of Hesse-Kassel (essentially governor of the region, under the rule of the Holy Roman Emperor who was Joseph II at the time), he hired Mayer Rothschild to be the “Hoffaktor” of his considerable fortune.

A thorough description of the position of “Hoffaktor” is probably worth a TodayIFoundOut article by itself, but it essentially translates to “court Jew.” While politically incorrect today, it was quite a favorable, honorable, powerful, and well-paid position. Essentially, a Hoffaktor was a Jewish banker who dealt with the finances, tax-collecting, and money lending in regards to European royalty; something close to what a high-priced accountant would do today. This began the Rothschilds’ rise to unparalleled fortune.

Mayer’s international financial influence continued to rise through the French Revolution (1789-1799) when he handled virtually all of the financial aspects of the war. As put by Count Corti in the book The Rise of the House of Rothschild, “Every government wanted money: there were loans to be raised, exchanges to be negotiated, armies to be clothed and fed. Wherever there were business to be done, there were the Rothschild with their offers and quotations.”

By 1800, Rothschild was one of the ten wealthiest men in Frankfurt. He also had had five sons, each taking up the family business. When they got old enough, they were strategically situated across Europe, bringing their wealth, expertise, and family connections with them. This is how many historians have speculated that the Rothschilds were able to keep their wealth when so many other prominent families lost it during these turbulent times in Europe.. With a “judicious selection of points of vantage,” the Rothschild brothers were stationed in Frankfurt, London, Naples, Paris, and Vienna, each “becoming indispensable to his adopted country,” yet working together with the family to ensure maximum profit. Their only true allegiance was to the Rothschild name.

In 1812, Mayer Rothschild passed away, but not before assuring the continued fortune of the family for centuries to come by carefully arranging marriages for his sons, often to cousins, keeping everything within the family to ensure the wealth never left (similar to royal intermarriages). (Interestingly, contrary to popular belief, genetically speaking, cousin marriages aren’t nearly as bad as is often made out.  See: The Truth About Cousins and Marriage)

The European wars of the early 19th century furthered the Rothschild’s wealth and influence. Nathan Mayer Rothschild was the most cunning, savvy, richest and possibly dishonest of the famed five Rothschild brothers. Historians argue the morality behind his methods – and what are true stories and what were made up due to jealousy and sometimes antisemitism –  but the result remained the same – he became exorbitantly rich. Stationed in London (as part of his father Mayer’s business plan) when the Napoleonic Wars officially broke out in 1803, he single-handedly helped finance the Duke of Wellington and his opposition to France. He arranged shipments of bullion (refined, melted, and rare metals shaped into coins or bars) to armies across Europe that were fighting France.

He also used the Rothschild network across Europe, a system of couriers, agents, information gatherers (and, as legend had it, carrier pigeons) who fed him news of the war, at times, a full day ahead of the government knowing. This allowed him  to spread rumors of losses, when he knew full well that Britain and her armies had won. He could depress stock prices and, when people panicked, he bought. The most well-known example of this was pertaining to the Battle of Waterloo in 1815. Rumors ran rampant that Britain had lost the crucial battle, causing markets to crash. When word came back that it was Napoleon who had suffered a terrible defeat, it was Nathan Mayer Rothschild who reaped the enormous benefits from previously buying stock and bonds at depressed prices. This was speculation and insider trading at its finest, practices that would no doubt find him in prison today in many nations.

As with many extremely rich industrialists of the 19th and 20th century (i.e. Rockefeller, Carnegie, etc.), while their practices may have not held to the highest of moral standards, they did use their power and money for good causes as well. Nathan Rothschild was known as an abolitionist, working toward eradicating the slave trade in Britain. For instance, it is said he helped finance the twenty million pounds (about £1.7 billion today or $2.6 billion) needed to buy out British plantations, as well as the passing of the Slavery Abolition Act of 1833.

Through the 19th century, the Rothschild’s wealth continued to grow. Nathan had seven children, including four sons (sons were the ones that carried on the family business). His son Lionel became the first Jewish person to be elected into the House of Commons in Britain, though, previous to this Jews were supposed to be barred from it. In order to get around this, the Prime Minister John Russell introduced and got passed the Jewish Relief Act of 1858, taking away this restriction. He had a social conscience as well, helping to finance relief for Irish famine victims.

As the years rolled by and the 19th century turned into the 20th, the Rothschilds continued to be among the wealthiest and most influential bankers in the world. Nathan Rothschild, better known as Lord Rothschild, began issuing loans to countries beyond Europe, most notably the US.

Beyond banking, the Rothschilds are also well known in the world of wine and art collecting. In the late 19th century, the Lord Rothschild arranged for the purchase of several estates in France. They became world-renown vineyards and, to this day, Rothschild wine is among the most expensive in the world. As for art collecting, the Lord Rothschild and his brother, Albert, were avid collectors and buyers of works of art, filling their enormous homes with priceless paintings, provocative sculptures, French furniture, china, and scientific equipment. Said the Baroness Bettina der Rothschild to the New York Times in 1999 about her great uncle the Lord Rothschild, “It was Nathaniel who especially loved buying scientific instruments. Who could ever think that microscopes were beautiful, but these were.”

These collections were hailed across Europe and the envy of many. However, in March of 1938, within 24 hours of Hitler’s SS Army “annexing” Austria, Nazis stripped the Rothschild’s homes in the region of all their priceless possessions. With the intention of putting the collection on display in his own proposed Hitler Museum in Linz, Austria (Hitler’s hometown), Hitler had all the art hidden away in a ski resort high in the Alps. The massive collection was finally discovered by American GIs after the war. It took 54 years (1999) before the Austrian government decided to give the art back to their rightful owners, the descendants of the Rothschild family. Many of these works were hanging in Austrian museums prior to this, despite the knowledge that they had been stolen during the war.

However, months after receiving most of the art back, the Rothschild family decided to donate or sell nearly all of the collection. Said Baroness Bettina der Rothschild at the time, “But it just doesn’t make sense to keep them. We all live very differently today than my parents did. Not only are the security questions terrifying and the insurance costs prohibitive, but this type of 18th-century French furniture needs a butler and two housemaids constantly polishing it. That’s just not the way we live.”  They’ve also in the last century or so donated several amazing estates, such as the Waddesdon Manor and the Schloss Hinterleiten.

Today, the Rothschild family still exists and is still ridiculously rich (as mentioned with a combined wealth estimated at over a trillion dollars), though in recent times tend on the whole to try to keep themselves very low-profile, even with donations to charities. They also no longer focus as much on banking, instead often focusing their energies on wine, asset management, charity work, real estate, and social activism, attempting to keep with the family motto- Concordia Integritas Industria (“Unity, Integrity, Entrepreneurship”).