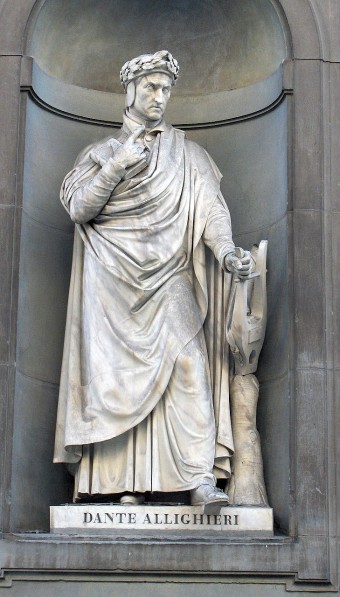 Dante Alighieri, who was known simply as Dante long before Cher or Madonna made single-name fame a thing, is considered by many the greatest poet of the Middle Ages, known chiefly for his masterwork “The Divine Comedy.” Dante rounded out his impressive resume with experience as both a politician and a philosopher. Not surprisingly, it was his involvement with politics that led to his banishment from his beloved city of Florence on January 27, 1302.

Born into a noble family, Dante began writing poetry as a young boy. His muse was a girl named Beatrice Pornari, who he fell in love with when they were around nine years old. Beatrice became the personification of the divine feminine for Dante, and his adoration of her in his poetry led her to be one of the most celebrated figures in literature.

Despite his passion for Beatrice, who died at the age of 25 in 1290, Dante was promised to the daughter of the prominent Donati family, Gemma Donati, when he was just 12 years old. The pair ultimately married after a lengthy engagement. The couple went on to have several children, but he never forgot his beloved Beatrice, who three years before her death became the wife of Simone dei Bardi. In the second book of “The Divine Comedy,” the poet’s guide through Purgatory is named in her honor.

In addition to his literary pursuits, Dante was also active in Florence’s political sphere, which was rife with intrigue and unrest. Dante’s allegiance to the White Guelphs ultimately cost him dearly when a rival faction, the Black Guelphs, took over Florence during a time when Dante was a member of a delegation sent to meet with the Pope in Rome. With Dante out of town, he was at least spared being killed in the coup.

Both the Black and White Guelphs were originally part of the same group in strong support of the Papacy, with Dante himself even taking part in the Battle of Campaldino in 1289, in which the Florentine Guelphs defeated the Arezzo Ghibellines.  Success proved fleeting as the Guelphs quickly divided into two parties, the White Guelphs, who Dante was a member, and the Black, with the former wanting more freedom from the power of the Papacy.

In any event, on January 27, 1302, Dante was ordered to appear before the new Black Guelph-led government, and when he failed to do so he was banished from Florence.  Most of the White Guelphs who were banished were simply ordered to pay a fine and then were allowed to return after two years, but Dante refused to pay, in no small part because most of his assets had already been taken by the Black Guelphs when they seized power.  In the end, Dante was sentenced to a lifelong banishment under threat of being burned to death if he ever dared return to Florence.

He never did. Over time, pardons were granted to many White Guelphs in exile, but Dante’s took longer than most, owing to being the author of certain scathing writings during his banishment.  However, Dante was invited back to his hometown in 1316, but the terms of his visit were those for pardoned criminals. As he felt he’d never done anything wrong to deserve the treatment in the first place, he said thanks, but no thanks. He spent the rest of his life exiled, moving from town to town. He died of malaria in 1321 and was buried in Ravenna, Italy. Some 687 years later, a motion was passed by the city council of Florence to officially rescind the order for Dante’s exile.

Dante’s “The Divine Comedy” had an incalculable influence on western literature and theology. It was written in Italian, making it more accessible than the vast majority of books which were written in Latin, a language only understood by the upper class. Dante began work on “The Divine Comedy” during his banishment, and it’s a fair assumption that if he had not been booted from Florence, the world may never have known one of its greatest literary masterpieces.