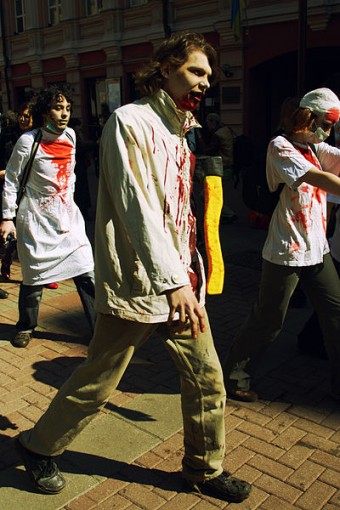 Zombies have been a pop culture staple for decades, and in that time the concept of the dead coming back to life somehow to feast on the living has proliferated virtually every form of media that exists. One trait that is seemingly synonymous with zombies is their apparent need to feed on the brains of the living. But why is this idea so intrinsically linked with zombies and where did it come from?

(To be clear when we say that we’re going to talk about zombies, we’re referring to zombies as they’re understood by modern pop culture, not the zombies of Haitian and West African folklore, which are an entirely different entity altogether.)

With that out of the way, we initially thought that answering this question was going to be easy since modern media featuring zombies all have roots back to the exact same source, George A. Romero’s cinematic masterpiece, Night of the Living Dead. While it’s true that zombies have been around in various forms before the release of Night of the Living Dead in 1968, Romero’s film is largely considered to have introduced the concept of the modern zombie to the world and almost all media involving them draws from his film in some way.

Although Romero is noted as the source for many of the common zombie tropes, shambolic movement and a hunger for human flesh being the most prominent, zombies don’t actually eat brains in any of the six “Of the Dead” series of films he directed. In fact, Romero himself has no idea where the brain-eating idea came from and in a 2010 interview with Vanity Fair, when asked about the link between zombies and brains, Romero very bluntly explained that: “Whenever I sign autographs, they always ask me, “Write ‘Eat Brains’!” I don’t understand what that means. I’ve never had a zombie eat a brain. But it’s become this landmark thing.”

Romero went on to explain that although his zombies do indeed eat human flesh, he’s never given much thought as to why they do this and even expressed amusement at the idea of a film exploring the idea of, as he put it, “Do they [zombies] shit?”

The origins of the “zombies eating brains” trope didn’t actually appear in media until well after Romero’s film debuted in the 60’s, first being featured in the 1985 movie, Return of the Living Dead. While you could be forgiven for thinking Romero had a hand in making this film due to its title, it was actually released entirely independent of his input. You see, after the release of Night of the Living Dead in ’68, Romero and his co-writer, John Russo parted ways and reached the agreement that Russo would retain the rights to the “living dead” suffix whilst Romero agreed to use “of the dead” in any subsequent media he produced.

Though Russo had a hand in the creation of the original Night of the Living Dead, Return of the Living Dead isn’t considered to be linked to the official “of the dead” series. This is mainly due to the numerous discrepancies between the zombies in both men’s films. While the zombies in Romero’s films can be “killed” in a sense by destroying their brain, Russo’s zombies are effectively immortal, being shown to survive being decapitated and even burned to a crisp.

In regards to why the zombies feed on brains, the closest we’ve ever come to an official explanation is a quote from Return of the Living Dead’s writer and director, Dan O’Bannon, who suggested that the undead felt the need to feed on the brains of the recently living because it somehow made them feel better by easing their pain. Avid fans of the zombie genre have tried to expand on this reasoning by asserting that zombies eat brains and guts because of the high levels of serotonin they contain, something that is kind of alluded to but by no means confirmed in the film’s official commentary where the production designer for the film, William Stout, notes that the idea of eating brains somehow alleviating the zombie’s pain “makes sense“.

As for investing such time and effort in such zombie minutia, Romero, who we’re treating as the de facto authority on all things zombie, because he kind of is, has criticised people in the past for taking his work too seriously including Max Brooks, who you may recognise as the author of the best selling Zombie Survival Guide. Romero has always maintained that the focus of his movies isn’t the zombies- it’s us, or rather our reaction to them and that the zombies and how they function isn’t important. An idea that is shared by the many creators of media inspired by his work.

For example, Robert Kirkman, the creator of the immensely popular Walking Dead series has stated that he will never reveal how the original zombie outbreak started or how the zombies infect through biting because it’s “unimportant” to the story. Likewise, in the film Shaun of the Dead, the cause of the zombie apocalypse the film revolves around and how exactly the zombies “work” is never revealed, only hinted at as a direct homage to Romero’s films where we’re similarly never told why or how zombies are able to exist.

As for why the idea of zombies eating brains has managed to become so widespread despite the fact it’s not a trait Romero’s zombie’s (and by extension almost all zombies in modern fiction) share, The Simpsons are believed to be the main culprit in the idea becoming popularised. The 1992 classic Treehouse of Horror segment Dial Z for Zombies, which itself was a spoof of Return of the Living Dead is one of the earliest pieces of media with the exception of Return of the Living Dead itself to feature brain eating zombies. To quote Matthew Belinkie of OverthinkingIt.com: “millions of kids saw this episode before they were old enough to see a real zombie film. I suspect that for a whole generation, this was the first zombie story we ever saw. And that, my friends, is why we think that zombies eat brains, even though most of us have never seen a movie where this is the case.”