The Origin of the Phrase “A Penny For Your Thoughts”

December 8, 2014 Matt Blitz
Mark C. asks: Where did the expression “a penny for your thoughts” come from? 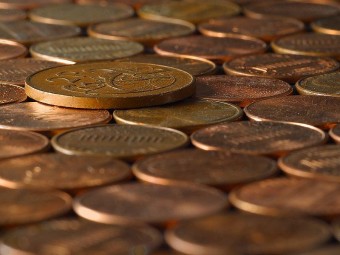 The word “penny” may have come from the English ruler Penda, King of Mencia (an Anglo-Saxton kingdom in today’s English midlands). During his reign from 626 AD to 655 AD, he issued coins that were called “pending.” To further this theory along, the old English word word for penny is “penige.” In fact, the Danish still uses the word “Penge” for their money. Now, if you think that “penny” came from the Danish word (not the Danish coming from the English), then the word could have something to do with the pans that they used to use to coin the money.

As with most idioms or sayings, no one is exactly sure who first said “a penny for your thoughts” or when. But we do know in this case who was the first to publish it and then who popularized it.

In 1522, Sir Thomas More’s book Four Last Things was published posthumously. It was a book of meditations on death, God’s judgement, pain, and how to combat “spiritual diseases.” Real uplifting stuff. In it, it reads,

“As it often happeth that the very face sheweth the mind walking a pilgrimage, in such wise that, not without some note and reproach of such vagrant mind, other folk suddenly say to them, ‘A penny for your thought.’”

In other words, a wise man has fallen silent and in order to garner his wisdom, money is offered. The proverb is used in much the same way today. Despite More’s use, the saying didn’t seem to gain widespread popularity until after 1547, with a book written by John Heywood.

Heywood is best known as a playwright and a collector of proverbs. Born around 1497 (records before the 17th century are almost always spotty on these types of dates), he began his career as a singer in the “Chapel Royal” for Henry VIII. His career was going along pretty well, singing, teaching others to sing, and, occasionally, acting. In the 1530s, he started writing “interludes,” which were essentially what we would call sketches today – small, one-act plays which were usually performed within bigger plays. This is how we began to gain some notoriety.

It didn’t hurt that his interludes were usually comedic in nature and poked fun at the very powerful Church (despite his own devout Catholic ways). A rather interesting part of this was that Henry VIII was also a devout Catholic, but had been excommunicated from the Roman Catholic Church. So, Heywood gained favor with the King, but angered clergymen with his barbs in this rather divisive political climate.

Either way, in 1546, at the height of his popularity, he wrote a two hundred page book entitled A dialogue conteinying the nomber in effect of all the proverbes in the Englishe tongue, which would later become known more simply as  The Proverbs and Epigrams of John Heywood. Even though the book is named after him, he never claimed to have made any of these up. He simply collected them so that they would be remembered. As said in the preface of the book, “Rembrying and confydering what the pyth is, that by rememberence of these prouerbes male grow.” Several well-known proverbs show up in this book include “Rome was not built one day” and “all that is well ends well.” It also includes, “penny for your thoughts” or as written in the book “Freend (quoth the good man) a peny for your thought.”

Heywood’s political statements within his interludes came back to bite him a bit when, in 1547 (only a year after his book), the ten year old son of Henry VIII, Edward, took the throne. With Edward being Protestant, Heywood being Catholic and taking shots at the Church, he thought it was safer to flee to Belgium to live out the rest of his days (which was actually pretty long – 33 years). Yes, he was essentially kicked out of England by a ten year old.

Now, how much was Thomas More or John Heywood (or any person from 16th century English) offering when he said he would give a penny for converting the various neurological electrical impulses happening in one’s brain into other electrical impulses that ultimately produce carefully crafted communicative vibrations in the air? Well, according to England’s National Archives currency convertor, a penny in 1540 would be worth (accounting for inflation) about 1.6 pounds today. Converting that into American dollars, that would be about $2.50, or the price of a McDonald’s Happy Meal. So, if someone offers you a penny for your thoughts, using your newfound knowledge you can now attempt to extort a McDonald’s Happy Meal out of them before you talk. Although for your health’s sake, perhaps in this case it would be best just to keep your mouth shut.