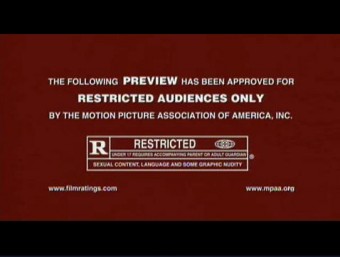 When you were a kid, sneaking into a rated R movie was a big deal. Everyone had their own tricks, but this author’s was to buy a ticket to a rated G Disney movie, say, Mulan; when the usher turned their back, I would run into a rated R movie like, for example American History X. But it wasn’t always this way – not kids sneaking into movies deemed only for adults, but rather the movie rating system. There was a time when movies didn’t have ratings. So how did we get from there to the current system?

Thomas Edison is credited for building the first film production studio nearby his home and lab in West Orange, New Jersey in 1893. It was called Black Maria, or the “Doghouse” by Edison himself. That is where he shot the short film The Edison Kinetoscopic Record of a Sneeze (otherwise known as Fred Ott’s Sneeze) in January 1894, which became the first film to be registered for a copyright. Two months later, Edison’s employee William K.L. Dickson filmed Carmencita, a Spanish dancer and maybe the first woman to appear on film. In some places, her projection was not allowed to be shown due to it revealing her legs and undergarments as she twirled. Perhaps the earliest case of film censorship.

In March 1897, James Corbett and Bob Fitzsimmons boxed one another in Carson City, Nevada. It was watched live by thousands of fans, but it was soon going to be seen by many more. Encoh Rector had filmed it on 11,000 feet of film and, two months later, the film premiered in New York. With a run time of over hundred minutes, The Corbett-Fitzsimmons Fight was the the first documentary and feature film ever. It would eventually be shown in ten different cities over an eleven month period. Now, prizefighting was illegal in every state in the country besides Nevada at the time, but it wasn’t necessarily illegal to SHOW prizefighting, hence, the popularity of the film. In response to this new technology circumventing the rules, seven states (including New York) all passed a law fining those who showed the film. While most of the fines were ignored, this was one of the first instances of governing bodies monitoring what people watched on film.

Ten years later, Chicago became the first city to regulate and censor movies. With over 115 nickelodeons across the city and the Chicago Tribune announcing that they had an “influence that is wholly vicious,” censorship rules were enacted in 1907. The city council gave the chief of police the power to issue – or not issue – permits for the exhibition of moving pictures. If a movie didn’t meet his standards (or someone he delegated the task too), a permit would be denied. The United States Supreme Court upheld Chicago’s right to do this. Additionally, Chicago created a separate pink permit to mark those movies that were “adult only.” This backfired when the pink permits acted as more of advertisements than deterrents.

In 1909, New York City, by order of Mayor George B. McClellan, closed 550 theaters because the police chief claimed that “most movie material was reprehensible.” In response to this, the National Board of Censorship was formed as “the first formal attempt by the film industry to ward off legal film censorship through quasi self-regulation.” For a small fee, the Board would recommend cuts.

A 1915 United States Supreme Court landmark decision firmly established that censorship could be applied to film. Mutual Film Corporation was a newsreel company that was getting annoyed by the fees and slow turn around time on what they could show and couldn’t show. They insisted that film should be protected under the First Amendment, freedom of speech, and should not be subjected to censorship. The Supreme Court disagreed. In Mutual v. Ohio Industrial Commission, Chief Justice Edward White wrote, “the exhibition of moving pictures is a business, pure and simple, originated and conducted for profit like other spectacles, and not to be regarded as part of the press of the country or as organs of public opinion within the meaning of freedom of speech and publication.”

With movies not being protected under the First Amendment, the industry had to protect itself from government censorship. In 1922, The Motion Picture Producers and Distributors of America (MPPDA) was formed. They hired former Postmaster General and head of the Republican National Committee William Hays as the head. While his job was simply to lobby in Washington on behalf of the movie industry, he also helped form a list of commonly rejected themes/subjects/occurrences that he asked movie studios to heed called the “Don’t and Be Careful” list. Some of the “Don’ts” included “The illegal traffic of drugs,” “white slavery,” and “ridicule of the clergy.” The “Be Careful” (in that “good taste may be emphasized”) list included “methods of smuggling,” “the use of the (American) flag,” and “men and women in bed together.”

In 1930, the MPPDA set up the Motion Picture Production Code (also known as the Hays Code). It didn’t wield any real power until it joined forces with the Legion of Decency, an organization created by the Catholic Church  (as well as other religious organizations) dedicated to combating “objectionable material.” From that point forward, the MPPDA would only approve films that had the Catholic Church’s seal of approval. The Legion of Decency would also assign ratings to the approved films.  For instance, the original 1947 Miracle on 34th Street was given the dreaded “B” rating by the Catholic Legion due to the mother in the film being divorced.  If you’re not familiar, a “B” rating announced that the Legion found it “Morally objectionable in part.” Later, the “B” and “C” (Condemned by the Legion of Decency) were merged to be one rating- “O” for “morally offensive.”

A few notable cases threatened this status quo. The MPPDA would not approve Howard Hughes’ film The Outlaw because it was deemed that there were too many shots that emphasized Jane Russell’s bosom. Hughes was insistent that the film and Russell’s chest needed to be seen, so in 1946 (five years after the film was shot), he signed a distribution deal with a non-MPAA signatory (name changed to Motion Picture Association of America in 1945) , United Artist (a studio originally founded by actors Charlie Chaplin, Mary Pickford, and Douglas Fairbanks). This began to erode the MPAA’s power.

Further, the Hollywood Antitrust Case of 1948 declared it was illegal for studios to own the theaters as well, prying the door open even more for exhibitors to pick and choose what movies they wanted to show (no matter if they had the MPAA’s approval or not). Next, in 1952, the Supreme Court reversed their 1915 decision by saying that “expression by means of motion pictures is included within the free speech and free press guaranty” of the First Amendment. That, combined with a series of films (1955’s Man with a Golden Arm, 1956’s Baby Doll, and the 1960 British film Blow-Up) that openly defied the MPAA’s censorship ruling yet were exhibited and did quite well financially, set the stage for a complete overhaul of the MPAA’s system of monitoring.

Jack Valenti worked for President Lyndon B. Johnson in the White House as a “special assistant to the press” before he became the President of the MPAA in 1968. Thanks to his experience and proximity to one of the greatest negotiators of our time, Valenti knew how to work with groups to reach a compromise. In 1968, he instituted a voluntary movie rating system because, as Valenti put it, the Hays Code had “the odious smell of censorship.” From 1968 to 1970, the ratings were G (General Audiences), M (for Mature Audiences), R (Restricted- under 17 admitted if accompanied), and X (not admitted if under 17). In 1970, “M” was changed to “PG” (Parental Guidance) due to the confusing nature of the term “mature audiences.”

As for the X rating, it wasn’t synonymous with pornography until the 1970s. At first, it simply meant that no one under 17 would be admitted to the movie, but the MPAA never trademarked the X rating (unlike the other ratings) and it was hijacked by the pornography industry as a means to hype up their material, often adding several Xs to imply that their film was much more risque and obscene than others. In fact, several mainstream and well-regarded movies were given X ratings when first released before it became strongly associated with pornography, including A Clockwork Orange, The Evil Dead, and Midnight Cowboy. In 1990, this “pornography” association ultimately gave rise to the MPAA abandoning the X rating in favor of a new NC-17 rating for films where those under 17 were not to be admitted.  Six years later, this was changed to anyone 17 and under, making 18 the new age requirement for these films.

As for PG-13, it was Steven Spielberg who helped usher in that rating. When Jaws was released in 1977, it was rated PG, despite the violence being too much for young kids, but of course deemed not enough that it needed an R rating. In 1984, he directed Indiana Jones and the Temple of Doom and was the executive producer on Gremlins, and both received a PG rating. He felt the PG rating was too broad and suggested a PG-14 rating. The next year, the MPAA, taking Spielberg’s suggestion, instituted the PG-13 rating and Red Dawn was the first film with that rating. And the rest, as they say, is history.