Charles Dickens and the Origin of the “Porterhouse Steak”

December 30, 2014 Melissa 3 comments
Mark asks: Why is a porterhouse steak called that? 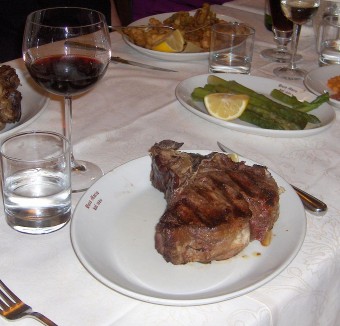 Essentially two steaks in one, a Porterhouse steak, cut from the short loin of (typically) a steer, has a filet on one side of its T-shaped bone, and a New York Strip on the other. Presenting a massive plate of meat and often big enough for two to share, the Porterhouse has become a staple of American steak houses.

To be an official Porterhouse (as opposed to just a T-bone), the USDA requires that the steak be cut to no less than 1.25″ thick, which typically at a restaurant translates into a 16-ounce portion. It may be larger, however, and it is common to find both 24 and 48 ounce Porterhouse steaks (at about 1.5″ and 2.25″, respectively), on steak house menus as well.

Its name’s origins aren’t well known. One prominent theory, perhaps the most likely general origin, is that it traces back to “porter-house,” meaning a “restaurant or chophouse where porter [a kind of beer] is served,” first attested around 1754.

As for a moniker for a certain type of steak served at such establishments, “Porterhouse steak,” this seems to have first popped up around the 1840s, with some claiming it first appeared on the menu at a steakhouse in New York City. However, clear documentation on this one is a bit lacking. A better documented first instance of “porter-house steak,” is seen in 1842 when it appeared in Cornelius Mathews, The Career of Puffer Hopkins: “I guess I’ll take a small porter-house steak, without the bone, for this time only.”

The New York Public Library has a large collection of historical menus available for perusal online, but the earliest menu I could find in that collection with a Porterhouse steak is from 1900 and the Northern Steamship Company, which offered a single portion of “Porterhouse Steak,” for $1.50. Likewise, also in 1900, Washington, D.C.’s Metropolitan Club sold several different versions of a Porterhouse steak, including small ($1.00), the Porterhouse ($1.50) and an “Extra Porterhouse” ($2.50).

As for alternate theories, many around Boston disagree with the preceding claim, and they posit the name originated with Zachariah Porter, proprietor of Cambridge, Massachusetts’ Porter’s hotel.

A third claim places the origin of the enormous steak with the Porter house in Sandusky, Ohio. Recorded in a multi-volume history of the Southern Lake Eerie region written by a local lawyer, Hewson L. Peeke, according to this story, Charles Dickens, the famous English novelist, inadvertently named the cut.

As told by Peeke, after having been served the steak in Sandusky during a visit in 1842, Dickens traveled to Buffalo, New York where he requested of a hotel owner there, a “steak like you get at the Porter house in Sandusky.” The industrious Buffalo proprietor was then said to, according to the legend, make a fortune by “advertising ‘Porterhouse steak like Charles Dickens likes.'” Remarkably, according to a 1923 article in the Cambridge Chronicle, a signature purporting to be Charles Dickens’ was found in an old register kept in the Sandusky Porter house’s basement.