A Brief History of the Gold Standard in America 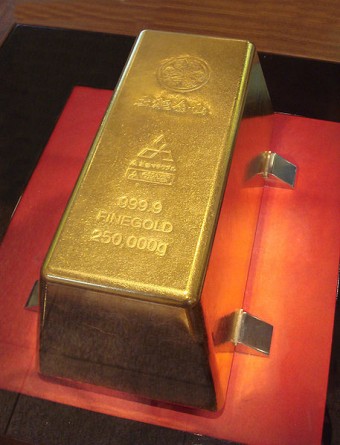 To begin with, if you’re not familiar, “the gold standard” is a monetary standard where the basic unit of currency is gold. Of course, this doesn’t necessarily mean that gold is directly used in the transaction (though, it could be and that is known as a pure gold standard). Otherwise often paper money or another metal is used as a representation of some amount of gold.  So how did the idea of using gold as the basis for a medium of exchange begin?

It is believed the first coins were used in 6th century BC in Anatolia (now known as Asia Minor or Turkey). They were actually bimetal coins, gold and silver. By regulating the minting of coins with the same weight and purity of gold and silver, it allowed each coin to have the same exact value and helped simplify commerce over something like a bartering system.  The relative value of even small amounts of these precious metals also allowed an individual to carry around their currency quite easily, unlike, say, having to haul around your sheep or donkeys to buy something.

Fast-forward 2500 years to America in 1792 when, with the country only about a decade old, the Coinage Act was enacted on the recommendation of Treasury Secretary Alexander Hamilton. It called for the establishment of the United States Mint and defined the dollar by silver. They also issued gold coins in denominations of ten dollars (known as “eagles”) and $2.50 (“quarter-eagles). Additionally, some foreign currency was declared legal tender, including the “Spanish milled dollar of silver” which equaled the US dollar in value. (The fact that Spanish currency was so widely circulated in the U.S. around the time of the first minting of the dollar is directly responsible for how we got the dollar sign $. See: Where the Dollar Sign Came From)

The U.S. Congress at this time also, by law, fixed the silver/gold price ratio at 15:1, which meant that 15 ounces of silver were worth one ounce of gold. This value was not Congress’ idea, but rather what the world market had determined at this time for the ratio between these metals. However, soon after the act was issued, silver decreased in value (to around 15.5:1 silver/gold ratio), pushing the country to use gold in international transactions and silver domestically. Thus, technically America, during the first few decades of its existence used a bimetal standard.

In 1834, in order to fix the ratio problem and wanting gold to be used as domestic currency, Congress passed another Coinage Act to raise the silver/gold coin ratio to 16:1, rather than the 15.5:1 the world markets set. Additionally, they reduced the amount of gold in the gold coins. This had the desired effect and made gold the principle coin for domestic commerce in the U.S. While not official, for practical purposes, this switched the U.S. from a bimetal standard to the gold standard.

Around 1850, gold discoveries in both America (California) and abroad (Australia) further impacted the market and drove gold prices down, which again made silver in America worth more on the open market than as currency.

After the war, the US Treasury wanted to return to the metallic standards of pre-war rates by decreasing the amount of greenbacks in circulation, which they set out to do. Greenbacks became redeemable for gold, but in 1873 a relatively minor change had long term implications. The Treasury eliminated the silver dollar, thus putting America on an exclusively gold standard, which lasted until 1933.

During this time, some politicians and policy makers did not agree with the gold standard. Most prominently, three-time presidential candidate William Jennings Bryan, who supported a bimetallic standard and denounced the gold standard in his “Cross of Gold” speech in 1896 at the Democratic National Convention. While the gold standard did help trade abroad, it limited the money supply at home, which didn’t sit well with many considering the financial panic of 1893. Bryan ended his speech with a flurry by saying, “You shall not crucify mankind upon a cross of gold.” Nonetheless, he lost the 1896 election to William McKinley.

The Gold Standard Act of 1900 reaffirmed America’s commitment to gold and the gold dollar was declared the standard unit of money, with every other form of currency in America able to be exchanged for gold (i.e. greenbacks, banknotes, left-over silver coins, etc.). This held until 1933 (save for a brief embargo on gold exports during World War I), when massive bank failures across the nation resulted in people beginning to hoard gold.  A change was needed.

Thus, directly after taking office in March of 1933, President Franklin D. Roosevelt forbade the banks from paying out or exporting gold. Further, on April 5, 1933, FDR ordered all gold in an amount of more than a hundred dollars be turned into the Federal Reserve in exchange for other currency. In return, people turning in the gold would be given a set price of $20.67 per ounce of the precious metal. Two months later, on June 5, 1933, Congress enacted a joint resolution “nullifying the right of creditors to demand payment in gold,” effectively taking the country off the gold standard, at least domestically.

This all ultimately worked out as planned as, in 1934, the price of gold was increased to $35 per ounce, which gave the Federal Reserve a 59% increase in funds (since they had nearly all the gold), inflating the country’s money supply.

The Gold Reserve Act of 1934 allowed for the continued definition of the dollar in terms of gold, but gold transactions were limited to foreign trade. According to a Congressional Report, “For an American citizen, the dollar no longer represented a given quantity of gold in any meaningful sense.”

This leads us to August 15, 1971, when President Richard Nixon and his administration officially took the country completely off of the gold standard by ending international trade with gold in a series of economic moves that became known as the “Nixon Shock.” This was done due to the large amount of circulation of the American dollar abroad (because of foreign lending and aid) and previous measures to preserve the Bretton Woods Agreements (enacted after World War II, where many countries fixed their exchange rates to the American dollar and set the official gold price at $35 per ounce). At this time, it became a concern that America did not have enough gold to cover the volume of dollars in worldwide circulation.

Despite the reasons behind it, taking the U.S. completely off the gold standard was a rather highly controversial maneuver at the time and the economic debate still rages on today. However, currently there is no country in the world that uses the gold standard anymore.