This Day in History: December 4th- The English Pope 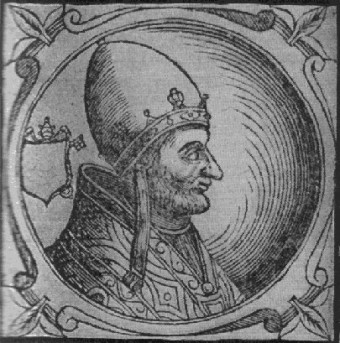 Pope Adrian IV began life as Nicholas Breakspear, hailing from St. Albans in Hertfordshire, England. He felt an affinity for the Church from an early age, although he was turned away from the local abbey due to his lack of education. He studied in Merton Priory in 1125, but being a Saxon in Norman England left little room for advancement, so Nicholas decided to seek his fortune in Arles, France.

Redoubling his efforts, Nicholas fared much better across the Channel. During a visit to the monastery of St. Rufus, he was invited to stay, and soon became the abbot. When in Rome on Church business, Pope Anastasius IV immediately saw his potential. He commanded Nicholas to remain in Rome and made him a cardinal. One of his first jobs was to establish the archbishopric in Norway, a delicate mission to say the least. His success earned him public honor and acclaim – and no doubt the papacy.

Not long after he returned to Rome (he was hailed as the “Apostle of the North”) Anastasius IV died, and on December 4, 1154 Nicholas Cardinal Breakspear was elected pope, taking the name Adrian IV. He would become the only Englishman to ascend the papal throne (so far anyway).

The new pope had plenty of drama to deal with right out of the gate. Arnold of Brescia and his pals occupied Rome and murdered Cardinal Gerard in broad daylight. Adrian, setting a new precedent, put the city under the interdict until everything was under control.

Then there was Holy Roman Emperor Friedrich Barbarossa, who wanted Adrian to crown him. This sounds simple enough, but there’s always a pecking order to be considered in these situations. The Pope was happy to comply, but insisted Barbarossa honor him by holding his stirrup as he mounted his horse.

Barbarossa told the Pope exactly where he could put his stirrup, until he found out Emperor Lothair had paid an earlier pope the same tribute. However, when the time came, Barbarossa performed his role in such a sarcastic, mocking manner that the crowd dissolved into laughter.

Then the King of Sicily got in on the act. His formidable army forced Adrian to make concessions, which angered Barbarossa, who claimed ownership of some of the lands the Pope was giving away. As a result, the Pope had to align himself with the Germans to protect against the invading forces of the Holy Roman Emperor.

The Pope also gave the English king Henry II permission to annex Ireland as part of his kingdom, causing a massive uproar, and laying the foundation for a millennium of trouble, no matter how noble his intent.

Adrian IV once told his friend John of Salisbury that he wished he had never left England. Can you blame the guy?