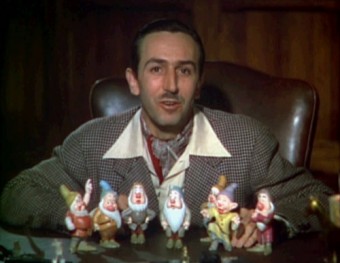 On December 5, 1901 Walter Elias Disney, the man who would turn a rodent into a beloved icon and go on to create a global empire of family-friendly movies, merchandise and theme parks, was born in Chicago, Illinois. Always the artist and entrepreneur, he used to sell his drawings to his neighbors to make a little extra money growing up.

After driving a Red Cross ambulance in France during World War I, he started his first business, Laugh-O-Grams, which went bankrupt pretty quickly. In August 1923, he moved to Hollywood and set up a studio with his brother Roy’s financial backing. He had mild success with his “Alice comedies”, but really hit the jackpot in 1928 with the creation of Mickey Mouse, who first appeared in the silent cartoon “Plane Crazy.”

By the late 1920s, sound was already taking the motion picture business by storm, and Walt Disney was one of the first to utilize this new technology in “’Steamboat Willie”, Mickey Mouse’s first staring role. In 1932, Walt was presented a special Oscar for the creation of Mickey Mouse, and by 1935 his series had inspired spin-offs for Donald Duck, Pluto and Goofy.

Disney’s instincts proved dead-on when he produced “Snow White and the Seven Dwarfs”, the very first full-length animated feature film. An instant hit with audiences and critics, the film made an astounding $4.2 million dollars during its initial release in North America. The profits from “Snow White and the Seven Dwarfs” provided Disney the funds to build a state-of-the-art studio so he could produce even more elaborate features such as “Pinocchio”, “Fantasia”, and “Bambi.”

World War II broke out not long after the release of “Dumbo.” The Disney studios and staff were contracted by the Army to create training films for military personnel for the duration of the war. After the war, Disney created a run of feature-length films with both live-action and animation, including “Song of the South”. In the late ‘40s, the studio was finally able to finish up and release “Alice in Wonderland” and “Peter Pan”, which had been shelved during WWII. “Cinderella” hit the theaters in 1948, and was Disney’s most successful release since “Snow White.”

But Walt Disney was only getting warmed up. He saw the huge potential in themed amusement parks, and in 1955, Disneyworld in Anaheim, California was open for business. Disney also branched out into television in 1954, and was one of the first to have a full-color program, “Wonderful World of Color”, in 1961.

By the time he died in 1966, Disney had created an empire that has continue to flourish since his death. And no, Walt Disney was not cryogenically frozen. He was cremated two days after his death from lung cancer. His daughter Diane stated in 1972: “There is absolutely no truth to the rumor that my father, Walt Disney, wished to be frozen. I doubt that my father had ever heard of cryonics.”