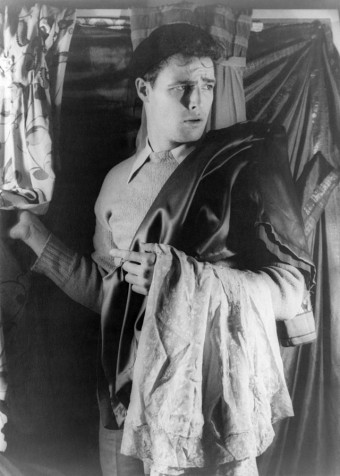 On December 3, 1947, a young Marlon Brando first delivered the anguished cry “STELLA” across the Ethel Barrymore Theatre during the debut performance of Tennessee Williams’ drama A Streetcar Named Desire.

The play explores the tension between tough, working class Stanley Kowalski (played by Marlon Brando), and Blanche Dubois, a genteel Southern belle sliding into poverty-stricken middle age (portrayed by Jessica Tandy). Blanche arrives to live with her younger sister Stella, Stanley’s wife (played by Kim Hunter), at her modest home in the French Quarter in New Orleans. Stella has come to grips with her lower standard of living and does her best to console her sister, who is in denial about hers. Blanche struggles to adjust to her reduced circumstances and fading beauty with as much grace as possible, as she attempts to conceal her advancing age and hyper-sexual nature from those who might judge her harshly. Stanley systematically destroys Blanche, tearing away at her defense mechanisms until she’s barely hanging on by a thread. In the climatic scene, Stanley rapes Blanche, and her tenuous grip on sanity is broken. The play ends as she is taken away in a straightjacket.

Streetcar shocked 1940s theater audiences with its intensely emotional dialogue and unapologetic sexuality and brutality. There was stunned silence when the curtain went down on opening night… followed by a lengthy and enthusiastic applause. On December 17, the cast took the show on the road. It would run for over 800 performances, and turned 23-year-old Marlon Brando into an “overnight” sensation. Jessica Tandy bagged a Tony award for her portrayal of Blanche Dubois, and Williams won the Pulitzer Prize for Drama.

Marlon Brando revived his performance of Stanley Kowalski for the award-winning 1951 film version of A Streetcar Named Desire. Other members of the original Broadway cast Kim Hunter (Stella) and Karl Malden (Mitch) also were cast in the movie and won Oscars for their performances. Academy awards also went to the film for Best Picture, and Vivien Leigh took a Best Actress statuette home for her portrayal of Blanche Dubois. Brando was strangely overlooked, although his performance of Stanley is the glue that holds the play and the film together. (He lost to Bogart in African Queen.)