This Day in History: December 2nd- The Marquis de Sade 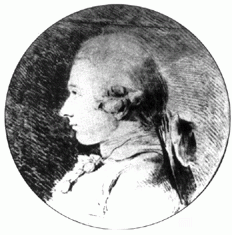 “Either kill me or take me like this, for I will not change.” The Marquis de Sade, a notorious libertine whose deeds are linked forever with his name in the term “sadist”, wrote these words to his wife in 1783 while serving an 11-year prison term. For de Sade, who would be convicted of many sexual crimes and spent a third of his life imprisoned, any denial or diversion from his true inclinations would be a fate worse than death.

Donatien Alphonse François de Sade was born in Paris in 1740 to an aristocratic family ennobled in the 12th century. He served in the military from the age of 14 to 26 and fought in the Seven Years War. In 1763, he married Renée-Pélagie de Montreuil, who was also from a socially prominent family. At the same time, he began an affair with an actress and started having prostitutes over to the house. Not the best start for a happy union.

In 1768, de Sade found himself in hot water for holding hostage and abusing a prostitute named Rose Keller. He also incurred the wrath of his mother-in-law Mme. de Montreuil when he began an affair with his wife’s younger sister at his castle in Lacoste. She had pull with the King and obtained a lettre de cachet, meaning de Sade could be arrested and imprisoned without being given cause or a trial at any time.

He was immediately arrested and imprisoned thanks to the lettre de cachet, but he managed to avoid the death sentence hanging over his head. In 1784, he was transferred from the Vincennes to the Bastille and was working on Les 120 journées de Sodome during his incarceration. The French people stormed the Bastille on July 15, 1789, and de Sade was free.

In 1790, he anonymously published several of his books, began a string of relationships with young girls, and joined the Revolutionary cause – a rare move for someone with his aristocratic background. In the midst of all this turmoil, he completed his most famous work, which de Sade himself described as “capable of corrupting the devil”, the novel Justine.

Citizen de Sade (as he was calling himself those days) was horrified by the Reign of Terror. Yet he composed a glowing eulogy for Jean-Paul Marat, probably due in part to the suspicions cast on him because of his nobility. When he become vocally critical of Robespierre, he was removed from his posts and jailed for almost a year until Robespierre had his own date with the guillotine. (To be clear, de Sade had no problem with murder in the heat of passion, but he found state-sanctioned killing barbaric.)

Although de Sade had done what most other French aristocrats had not been able to do – survive the French Revolution, by 1796 he was broke, and was forced to sell what was left of his castle after mobs of angry peasants got through with it, which really hurt its resale value. In 1801, Napoleon ordered the arrest of the anonymous author of Justine and Juliette (guess who?), and de Sade was put in the pokey yet again.

After allegations that he was trying to seduce his fellow inmates, de Sade was put in Bicêtre, a rough fortress prison, until his family intervened in 1803 and had him declared insane. His young girlfriend was allowed come along (by the time he died, he’d acquired two) and the jailer was a nice guy who even let the Marquis put on his plays.

On December 2, 1814, the Marquis de Sade died peacefully in his sleep. In his will, he requested his body not be opened for any reason, and that he be buried in the woods in Malmaison. Instead, he was given a Christian burial at the insane asylum, and his head was later removed from his grave for phrenological examination. His son had all of his many unpublished works burned.