When Art was an Olympic Sport 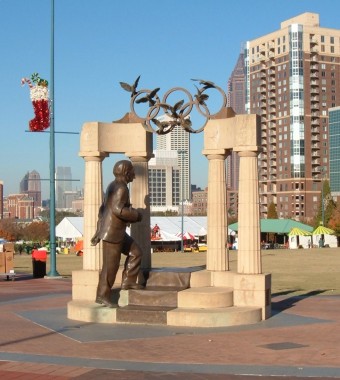 When Baron Pierre de Coubertin founded the International Olympic Committee (IOC) in 1894, he declared that one of the missions of the modern Olympiad would be “to reunite in the bonds of legitimate wedlock a long-divorced couple — Muscle and Mind.” To the Baron, Olympic competition wasn’t just going to be about physical athletics, but sports of the mind as well – and there are fewer greater “sports of the mind” than the arts. From 1912 to 1948, in seven Olympiads, over 151 Olympic medals were awarded in artistic competitions.

Growing up in the French autocracy, Coubertin valued a classical education. He loved sports, especially rugby, but there is little evidence he was particularly athletic himself. As his career as an educator gained steam, he pressed for more physical education in schools. He believed sports to be democratic, blurring class lines, but he also thought of physical education as a way to prepare the youth for the rigors of war. After all, when he was but a boy, he saw his beloved country humiliated in the Franco-Prussian War (or “War of 1870”).

Coubertin always admired how the ancient Greeks were able to combine classical and physical education, the epitome of this being the ancient Olympiad. So, he made an announcement to a Parisian sporting association in November 1892 that he was going to bring back the Olympic Games and make them an international competition. In April 1896, the first modern, international Olympic Games commenced in Athens, Greece. While 43 events encompassing 9 sports took place that first year, there were no art competitions.

That was supposed to change in 1908. With Coubertin pushing for the inclusion of art competitions into the Games, there was a plan in place to make that happen. Unfortunately, it didn’t work out due to several factors that were out of the Baron’s control. Early in 1907, only 18 months before the 1908 Olympiad, the IOC (which Coubertin was the head of) changed the location of the Games from Rome, Italy to London. The eruption of Mount Vesuvius in 1906 and a struggling economy made the Games infeasible in Rome. The rushed preparation in London caused several events to be cancelled, including the art competitions.

At the Stockholm, Sweden Games in 1912, art competitions officially became part of the Olympiad. This happened despite several prominent organizations, including the Stockholm Organizing Committee, being against attaching art competitions to the Olympics. They thought it was “meaningless” and logistically challenging. Nonetheless, the Baron had made up his mind and he pushed it through. Art was to become an official Olympic “sport.”

In September 1911, ten months prior to the 1912 Opening Ceremonies, a call for submissions was published with a list of rules and regulations. There were to be five categories of submissions: architecture, music, painting, sculpture and literature. All the works submitted “must be original and directly inspired by the idea of sport.” Additionally, the announcement contained a promise:

“Each of the laureates of the five contests will receive the medals of the Vth Olympiad. The winning works will be as much as possible displayed, published, or executed in the course of the Games.”

The 1912 Olympics only received 33 submissions (nearly all from Europeans), but still gave away five gold medals. However, because of the small number and the underwhelming quality of the entries, silver and bronze were not awarded in four of the five categories. The gold medal winners included a building plan for a “modern” stadium by two Swiss architects, a sculpture of a horse pulling a chariot by an American sculptor who had already won two athletic gold medals for sharpshooting, and an “Ode to Sport” penned by Germans “George Hohrod and Martin Eschbach.” As it turns out, Hohrod and Eschbach were pseudonyms for the person who really wrote the ode – the Baron himself. Understandably fearful they wouldn’t have enough entries, he took it upon himself to help the cause. Rather suspiciously, his ode won gold.

Though the 1916 Olympic Games were cancelled due to World War I, art was again on the Olympic program in the 1920 Berlin Olympics and the 1924 Games in Paris, where they received submission from 193 artists. At the 1928 Amsterdam Olympics, over 1100 works of art were submitted and put on display at the Municipal Museum. The Olympic art competition was now big enough that it was attracting real talent, including Italian sculptor Rembrandt Bugatti, American cartoonist Percy Crosby, and Dutch painter Isaac Israëls.

Despite this bringing legitimacy to the competition, it brought up the question of amateurism. Technically, all Olympic participants were supposed to be amateurs, but many artists used their well-regarded skills to make money, particularly the architects and musicians who almost universally were employed in those professions. How do you have a valid art competition with highly skilled artists if those entering weren’t allowed to make a living off their art?

Nevertheless, the art competitions were a hit.  For instance, at the 1932 Olympics in Los Angeles, nearly 400,000 visitors went to check out the art entries at the Los Angeles Museum of History.

The 1936 Olympics in Berlin are infamous for several reasons, many of which were related to the rise of Hitler and the Nazi party in Germany. The Third Reich’s Minister of Propaganda, Joseph Goebbels, felt the need to remind the German people that work entered into the competition needed to have been created within the last four years, i.e. when the Nazi party came into power. Not surprisingly, Germans won more than half of the gold medals given out in artistic competitions in 1936.

As for the Baron Pierre de Coubertin, he had stepped down as IOC president in 1925 and was in failing health in 1936 (he would pass away in 1937) and didn’t even attend the Olympics in 1936. Despite being French, he was greatly respected in Germany for his revival of the Olympic Games, which very much played into the hands of the Aryan masculinity mystique that the Nazi party promoted.

With no Olympics in 1944 due to World War II, the London Olympics in 1948 would be the last time an art competition would be officially part of the Olympic Games. The amateur question played a major factor in its removal after a report was presented demonstrating that virtually all of the artists submitting their works for their respective art competitions were also making money on their art.  A later report stated that it was, “illogical that professionals should compete at such exhibitions and be awarded Olympic medals.” With the question of amateur and professionals hanging over the competition, it diluted the entry pool and by 1952,  medals were no longer awarded on submissions of art to the Olympics.