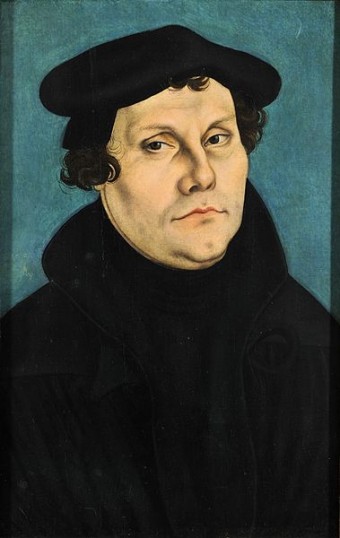 On the last day of October in 1517, a scholar and priest named Martin Luther did as priests commonly did at the time when they had something to discuss amongst the clergy- he nailed a piece of paper to the door of the Castle Church in Wittenburg, Germany.  Unlike many other such documents nailed to the doors of churches, this one sparked a religious and social revolution, and established Luther as a hero (to some) and father of the Protestant Reformation.  Interestingly, some argue that to solidify his claim to leadership, Luther also felt he had to do something else – talk tough; and in 16th century Germany, that meant having a potty mouth. Regardless of his motivations, Luther could turn a filthy phrase with the best of them, as you’ll soon see.

In her work, German Hercules: The Impact of Scatology on the Image of Martin Luther, Danielle Mead Skjelver notes that, in Luther’s time, vulgarity and scatology (a strong focus on excretory functions and their products, or more simply, poop) were a part of (sometimes) even polite society. (In fact, later Mozart wrote some lesser known music such as Leck mir den Arsch fein recht schön sauber “Lick me in the ass right well and clean,” more here) Beyond talk, public defecation, while not well-received, remained common, and in fact, spreading feces on the doorknob of a foe was not unheard of in this era.

In that vein, Luther and his allies would use copies of his detractors’ pamphlets as their toilet paper – and then send them back to the authors. This was in keeping with the practice of the German nobility who sometimes dipped their enemies’ coats of arms in excrement and then carried that insult into battle.

So, during this time speaking about do-do was, according to Mead Skjelver, simply a form of tough-talk – equivalent to today’s locker-room bravado. Adherents to this theory point to other German men from the 16th-18th centuries also well-known for their scatology, including Johannes Gutenberg and Wolfgang Mozart. With this last, a thorough study was done that showed that in 371 of his letters, 39% had some sort of scatological reference, including to buttocks or defecation (45 letters), shit (21) and arse (19), among others.

So what did Luther actually say? As an example, in 1542, Luther is reported to have described his depression as such: “I am ripe shit, so is the world a great wide asshole; eventually we will part.”[1]

To say he was preoccupied would be putting it mildly. In 1531, in discussing an illustrative conversation he had with the Devil (which took place on a toilet), Luther said, “I am cleansing my bowels and worshipping God Almighty; You deserve what descends and God what ascends.”[2]

So great was his love for pooing that he claimed one of his most significant revelations came while he was on the pot. In attempting to understand Romans 1:17, the realization that salvation came through faith rather than through his effort struck him, and as he later claimed, “Here I felt that I was altogether born again, and had entered Paradise itself through open gates.”[3]

In his defense, the idea of the Devil loitering in toilets and it being his “playground,” was a common one.[4] So, it makes a weird sort of sense that Luther would, as he put it, “chase him [Satan] away with a fart,” or write to him, “Dear Devil . . . I have shat in my pants and breeches; hang them on your neck and wipe your mouth with them.”[5]

More than just bizarre diary entries, it has been argued that the Devil in these writings often served as a stand-in for many of Luther’s enemies, and that Luther’s followers were aware of this and applauded him for his bravery and strength.[6]

Not everyone was impressed with Luther’s vulgarity, however. The English Catholic, Thomas More (1478-1535) (Henry VIII had his head cut off on July 6), called Luther a “buffoon . . . [who will] carry nothing in his mouth other than cesspools, sewers, latrines, shit and dung . . . .”[7]

But Luther was undeterred and toward the end of his life, penned what was essentially an open letter to Pope Paul III in 1545 called Against the Papacy in Rome Founded by the Devil, in which Luther pulled out all the stops. Saving some of his best for last, Luther described the practice of indulgences as “an utter shitting,” and went on to claim that the “dearest little ass-pope” not only worshiped Satan, but “also lick[ed his] behind.”[8] (Licking someone’s butt at this time being somewhat equivalent to the modern expression “kiss-ass.”) He also said the Pope farted so loudly and powerfully, that “it is a wonder that it did not tear his hole and belly apart.”[9]