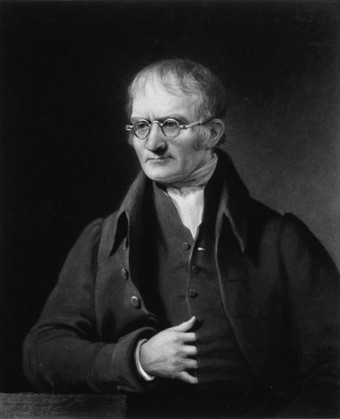 John Dalton (1766-1844) was a distinguished scientist who is known for, among many other things, his theories about atoms, his law of partial pressures of gases and liquids (published in 1803), and being one of the first scientists to study color blindness. In fact, because of his work, for some time a common term for color blindness was “Daltonism,” and the French for “color blind” is “Daltonien.”

Color blind himself, Dalton was only able to see two primary hues: a yellow-ish hue that encompassed a typical person’s green, yellow and orange, and a second that was the equivalent of a non-color blind person’s perception of blue and violet. With regards to what most would call red, Dalton saw only “little more than a shade, or defect of light.”

Since Dalton’s brother shared this condition, Dalton believed that color-blindness was inherited. He also theorized after much study that its precise mechanism was that his eyes (and his brothers’) were tinted blue in the vitreous humour (the gel in the middle of the eye in between the lens and the retina).

Leaving instructions that his eyes be dissected after his death to confirm or disprove this theory, his assistant, Joseph Ransome, complied. On July 28, 1844 (the day after Dalton’s demise), Ransome excised Dalton’s eyeballs and thoroughly dissected one – revealing a perfectly clear vitreous humour, disproving part of Dalton’s theory.

Later scientists noted that Ransome “shrewdly left the second eye almost intact,” although that “almost” is significant. Before he stored the remaining portions of Dalton’s eyes, Ransome lopped off the posterior pole of the second eye, looked through Dalton’s eyeball and realized that when he did so, neither red nor green were distorted but appeared of the proper color. Clearly, not only was the vitreous humour not the cause of Dalton’s color-blindness, but no other filter within the eye was responsible either.

A contemporary of Dalton’s, Thomas Young (1773-1829, an English scientist and philosopher, among other things), first floated the theory that color vision was the result of sensitivity to a combination of three colors: red, blue and green. He also hypothesized that color-blindness was due to “the absence or paralysis of those fibers of the retina, which are calculated to perceive red.”

Fast-forward 150 years, and today we know that color perception is due to the presence of three types of photopigments in the cones of the retina. Each pigment is comprised of a specific type of protein bound together with retinal, and different types of cone cells are sensitive to different wavelengths: shortwave (near 420 nanometers or nm), middlewave (at 530 nm) and longwave (at 560 nm). Violet is at the short wavelength end of the visible spectrum, greens and yellows in the middle, and reds and the long end.

With these developments in the understanding of vision, many had theorized that, since Dalton had difficulty with red, he was a protanope, or a person who could not see the colors at the longwave (LW) end of the visible spectrum.

To verify (or disprove) this theory and finally solve the long standing mystery of Dalton’s vision, in 1995, a few intrepid researchers took samples of Dalton’s eyeballs, preserved only in air, and subjected them to DNA analysis. They determined that Dalton actually had the required genes for the protein necessary for the photopgiment for LW perception, but that he lacked the required middlewave (MW) gene. 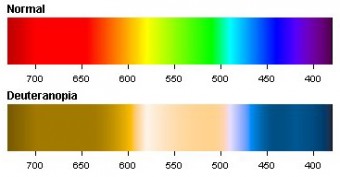 Proving that Dalton was partially right, that his color-blindness was inherited, the researchers concluded that rather than being a protonape, he was actually a much more rare deuteranope (green-blind). With this type of color blindness, rather than a mutation, the individual lacks medium wavelength cones altogether. Further, besides being unable to see several hues of colors, deuteranopes do not see the vividness of colors at the higher range that others see, which in fully color-sighted people is due to the opposing signals between LW and MW photopigments.