This Day in History: November 5th- Over Three Hundred Sentenced to Hang 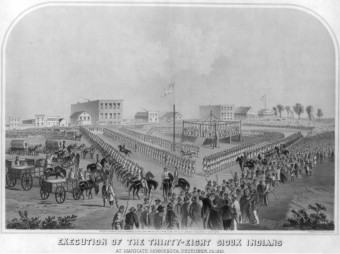 In the aftermath of the Great Sioux Uprising, now more accurately referred to as the U.S. – Dakota War of 1862, over three hundred Sioux men were sentenced to death by hanging after a trial that can only be described as farcical at best. Specifically, out of the 392 prisoners put on trial, 303 were given death sentences and, of the remaining, 16 were sent to prison.

The conflict in question was the result of half a century of ill-treatment from the American settlers towards the Santee Sioux, who had been living in the Minnesota valley for countless generations. The government continued to force the native peoples on to smaller reservations with promises of compensation for their lands that generally never materialized.

Federal contractors and agents pocketed money and food earmarked for the Sioux by treaty, and going into the winter of 1862, they were facing starvation. The agents knew this, but blithely ignored their cries for help. The local traders wouldn’t extend them any more credit, and one dismissively stated in the supposed Marie Antoinette-style that if the Sioux got too hungry, they could eat grass. (Note: Marie Antoinette never actually said this and her vilification in history is in stark contrast to her actual life.)

Angry and desperate, the Sioux struck back by killing Anglo settlers and kidnapping the women. The U.S. Army stepped in (those that weren’t busy fighting in the Civil War), but the Sioux warriors killed 13 American soldiers and wounded another 47. Then on September 23, 1862, the Sioux were defeated by American troops under the leadership of General Henry H. Sibley.

On September 28, 1862 the trials began. The tribunal was beyond biased, the defendants were hampered by a language barrier, and the outcome could hardly have been a surprise to anyone.

The trial transcripts of all the condemned men were sent to Washington so President Lincoln and other high-ranking government lawyers could take a look at them. Lincoln felt he had a responsibility to find some middle ground. He told the Senate he was: “Anxious to not act with so much clemency as to encourage another outbreak on one hand, nor with so much severity as to be real cruelty on the other, I ordered a careful examination of the records of the trials to be made, in view of first ordering the execution of such as had been proved guilty of violating females.”

However, when just two of the men on trial were found guilty of rape (not enough to satisfy the settler’s demand for justice nor strong enough of a statement to discourage other uprisings), Lincoln altered his death sentence criteria to include those who took part in civilian “massacres” as opposed to mere “battles.” In the end, the president chose 39 Sante Sioux to die and sent word to Silbey.

On December 26, 1862, 4,000 spectators gathered in Makato to watch the 38 prisoners (one got a last minute reprieve) die on the scaffold. The men sang a Dakota song as they took their assigned places and white hoods were placed over their heads. The Sioux then clasped hands as a drum beat signaled the cut of a rope that ended their lives.

The 38 people who died that day are honored and remembered in two pow-wows held in Minnesota each year. A pow-wow is held in Makato annually to commemorate those lost lives, but also to promote reconciliation between the Native American and white communities. One is also held in Birch Coulee in memory of those of who died in one of the largest mass executions in United States history.