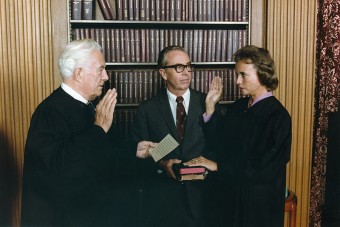 Sandra Day O’Connor was sworn in by Chief Justice Warren Burger as the first female Supreme Court Justice in the United States on September 25, 1981.

Born in El Paso Texas in 1930, Sandra Day’s interest in the law was sparked by a legal issue involving her family’s cattle ranch in Arizona, where she grew up. In 1950, Sandra enrolled in Stanford Law School and earned her law degree in two years, graduating third in her class. Shortly after graduation, she married a classmate, John Jay O’Connor III.

Despite her impressive academic record, Sandra couldn’t find suitable work with a private law firm because of her sex (she was only offered jobs as a legal secretary), so she took a job as a deputy county attorney in San Mateo California. John O’Connor was drafted into the army as a judge in 1953, and the couple lived in West Germany for three years where Sandra worked as a civilian lawyer in the Quartermaster’s Corps.

The O’Connors settled in Phoenix in 1957 and had four sons over the following six years. Sandra still found it impossible to find work with a law firm – so she started her own. She took many small cases spanning a wide variety of legal issues to gain experience and establish a reputation.

After taking five years off to raise her sons and do volunteer work, O’Connor became involved with the Arizona Republican Party and worked as an assistant state attorney general. Arizona Governor Jack Williams appointed O’Connor to the vacant Senate seat left when its occupant resigned to take a post in Washington. She successfully defended her Senate seat for two additional terms and became the majority leader, a first for a woman in U.S. politics.

O’Connor changed course a bit in 1974 and ran for superior court judge in Maricopa County. Leaders of the Arizona Republican Party tried to coax her to run for governor in 1978, but Sandra declined. A year later, the democratic (this was when bipartisanship still existed) governor nominated O’Connor to the state Court of Appeals.

Then, in 1981, President Ronald Reagan nominated Sandra Day O’Connor as the first woman to sit on the United States Supreme Court. Talk about great expectations.

O’Connor had detractors from both sides of the aisle before she had even been sworn in. Conservatives bemoaned her lack of experience and constitutional knowledge, and claimed she was a wasted nomination. They also were suspicious of her views on abortion.

Progressives were thrilled to see a woman appointed to the Supreme Court, but since it was the Gipper doing the appointing, they had no illusions about O’Connor’s political compass and were disappointed with her lack of support for feminist causes.

Over the years, O’Connor proved herself to be a conservative centrist in an often divided High court. She voted to invalidate the Violence Against Women Act, but her vote was crucial in cases involving abortion and affirmative action. She was known for her scrupulously researched and dispassionate decisions on the bench. For a Supreme Court Judge, that’s not a bad legacy.