This Day in History: September 26th- Here’s the story… 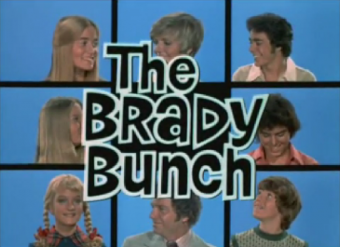 The show was mercilessly panned by critics and mocked by most TV viewers. It never once reached the top ten in the Neilson ratings. Yet it ran for five seasons and has been in continuous syndication ever since its final show in 1974.

As goofy and clean-cut as The Brady Brunch appears to us now – and did in its own time – its creator Sherwood Schwartz (who also blessed us with Gilligan’s Island) was way ahead of the curve in many ways. The Bradys, mirroring the trend that was happening more and more often in the late ‘60s, were a blended family.

Mike Brady, father of sons Greg, Peter and Bobby, was a widower.

We never learn the fate of Carol Brady’s first husband. Schwartz wanted Carol to be a divorcee, but ABC wasn’t on board with that, so Marcia, Jan and Cindy’s father was never mentioned.

But they did allow Mike and Carol to share a bed, which was more than Lucy and Ricky Ricardo ever got, so there is that.

So, Mike and Carol got married, and the show revolved around the mishaps of raising six kids in a house with one bathroom. One bathroom! Mike was an architect for Pete’s sake. You’d think he could have rectified that situation quite easily. But I digress.

The Brady Bunch ran during a time of tremendous social and political upheaval – an era when many teenagers were completely rebelling against their parents, teachers, and any form of authority. The Bradys kept things non-controversial. The worst thing you saw a Brady do was smoke a cigarette, and that was considered a crisis of epic proportions. Can you imagine Greg tripping on acid or Marcia coming home pregnant?

But that was much of the appeal of the Bradys for many. It was comforting to watch a family with parents unerringly wise and loving acting as a shield against the big bad world. In most cases this is a pipe dream, but for a half hour the less cynical could at least indulge in the fantasy.

At least until a couple of decades after the original show ended, and the actors themselves shared the behind the scenes dirt that went on during the filming of America’s favorite wholesome sitcom. For instance, from Barry William’s book Growing up Brady, he talks of such gems as Mike Brady (Robert Reed) showing up for work drunk! Greg Brady showing up high!  And Peter (Chris Knight) and Jan (Eve Plumb) getting caught by the L.A. cops in the middle of a grope-fest in his truck right after the series was cancelled! Middle kids unite indeed!