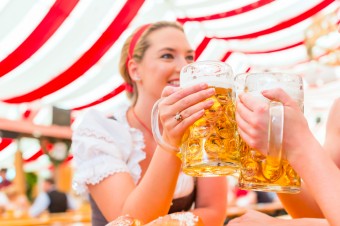 As we move past the summer and into the fall, we can count on certain things: the leaves changing color, the weather growing crisper, ghost stories being told, and the celebration of the Bavarian tradition of Oktoberfest. Even here in America, Oktoberfest is beloved as a time for dancing, dressing in lederhosen, eating sausages, and, of course, drinking beer.

But what are the origins of Oktoberfest? What are we joyously celebrating? And do you actually have to wear very unflattering lederhosen?

On October 12, 1810, the Bavarian Crown Prince Ludwig married Princess Therese von Sachsen-Hildburghausen in a grand ceremony in the Bavarian city of Munich. In order to involve the “commoner,” the couple and their royal parents organized a giant wedding party for the entire city of Munich outside the city gates upon a piece of cattle grazing land.

An estimated 40,000 Bavarian citizens showed up ready to party and have fun. And they certainly did. Feasting, drinking, dancing were among the major highlights. Horse races (no doubt with huge wagers on the line) closed the festivities, with the Prince and his new bride cheering the ponies on. The party was so memorable that the meadow outside of the city gates was named “Theresienwiese,” or “Therese’s fields,” in honor of the blushing bride. Today, that meadow is known as “Wies’n,” an abbreviation of the original name, and is still the site of the annual Munich Oktoberfest.

A year later the Bavarian royalty, fully aware that the celebration earned them tons of goodwill from their subjects, decided to do it again, this time with more horse races and an agricultural fair. And they celebrated again in 1812. And for the next two hundred years, save for the two dozen times Oktoberfest has been cancelled due to wars and cholera epidemics. So, formally, Oktoberfest is a celebration of the wedding between Prince Ludwig and Princess Therese, who would become King Ludwig and Queen Therese of Bavaria in 1825.

However, Oktoberfest-like events (though not on this scale) had been going on, without an official name, for many, many years before that around this time of year in the region, as you’ll soon see. More than celebrating a marriage (and, as will be pointed out later, this marriage wasn’t the most stable anyway), Oktoberfest is a commemoration of the glorious process of beer-making.

The earliest known (purposefully) concocted alcoholic beverage dates back about nine thousand years to China, with a treat made of rice, honey, and fermented fruit. The first barley beer can likely be traced to the Middle East and the Sumerians of ancient Mesopotamia of five thousand years ago. In 1992, archaeologists in the region uncovered ceramics with a beer-like residue on it that was estimated to be from 3500 BCE. One of the earliest pieces of human writing is the “Hymn of Ninkasi,” not only an ode to the Sumerian goddess of beer, but an actual recipe for ancient beer from thirty eight hundred years ago, in all likelihood the recipe is much older than that.

From there, the art of beer-making traveled around the globe (it is well-documented that the Egyptians and Romans enjoyed the beverage) with recipes and the types of beer varying with the region. In fact, beer was much more popular in places like England, Germany, and other European countries where it was nearly impossible to grow grapes and have vineyards due to the colder weather, rendering the other popular alcoholic beverage of the time – wine – virtually a non-entity. By the Middle Ages, hops was being added as a preservative and for taste, bringing beer closer to what we now know it as today.

For years, people made and drank top-fermented beers, a process where fermentation occurs at a range of 62 to 77 degrees Fahrenheit causing the yeast to rise to the surface. This created ale, while adding hops made it a beer. It is thought that bottom-fermentation, or as it is known today lagering, was discovered by accident in the 16th century when beer was stored in cool and dry caverns that were around 46 degrees (or below) Fahrenheit for long periods of time.

So, certain types of beer (or ales or lagers, if you want to get technical) can only be made under certain conditions, usually relating to temperature. Considering refrigeration is a relatively modern invention, this meant the kind of beer that could be made was typically reliant on the time of year and the weather.

Ales, stouts, porters, and wheat beers are all part of the top-fermented beer family and, therefore, were made when the temperatures were warmer. Lagers, pilsners, and bocks (as well as American malt liquor) are examples of bottom-fermenting beers and were made in the cold, winter months.

Now, back to Oktoberfest. If you are reading this article out of doors, you are probably noticing the air turning cooler on this late September day. Well, so did Bavarian beer-makers. As the summer turned into fall, they knew production was halting on their ales, stouts, etc., and beginning on the lagers, pilsners, and forth. Considering German autumns get cold pretty quick, late September/early October was a perfect time to drink the rest of the summer beer and try the first, fresh batch of winter beer. In other words, the wedding of the Prince and Princess was just a perfectly-timed excuse to get drunk with the abundance of beer available.

So, when you head out for Oktoberfest this year, remember that you are not only celebrating a wedding, but the perfect time to try all variations of beer and, of course, lederhosen.