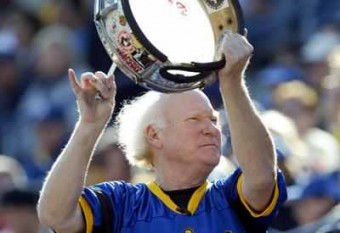 The wave, also generally known as the “Mexican wave” outside of the United States, was the brain-child of the longest continuously active professional cheerleader (41 years and counting), Krazy George Henderson, in the late 1970s. It made its national debut on October 15, 1981 in a playoff game between the Oakland Athletics and the New York Yankees, which the Yankees won 4-0, eliminating the A’s.

That said, there has been significant contention for the title of the inventor of the wave, with former Entertainment Tonight host, Robb Weller, stating he and Dave Hunter lead the first wave at a University of Washington Huskies (American football) game against Stanford on October 31, 1981.  Weller was an alumni cheerleader at UW and Hunter one of the band’s trumpet players.

The most obvious problem with this claim is that October 31, 1981 is a couple weeks after October 15, 1981.  Further, Krazy George’s claim is easily verified by sifting through the Major League Baseball archives to find the game in question. As the wave was something not seen before, with nearly all 47,302 in attendance participating (producing a complete, full-stadium cycle wave three times that game), players and the announcers took note. Video of this first documented wave, including showing Krazy George leading it, even made it onto the Oakland A’s highlight video for the season.

Of this first documented wave, Krazy George states, “I started with three sections and it went about five or six sections down. I did it again and it went 11 and then all the way around. It was insane… Joe Garigiola was up in the broadcast booth yelling at his cameramen to get that thing. Of course, no one knew what it was.”

After Krazy George pointed all these things out, the dispute shifted away from the first wave to who first thought it up.  This cannot be so easily proven.  Krazy George states that he had been mulling it over for several years before, with the initial inspiration coming from an old San Jose State cheer he lead around 1970. In it, he divided the crowd into three groups and had them alternatively yell “San!” “Jose!” and “State!” as he pointed at each group. Much later, while working a hockey game in Alberta, Canada, he’d evolved this to having the crowd jump up when they cheered.  There was a delay as he spun around pointing, resulting in something akin to the wave, with at one point the fans themselves taking over and doing it naturally without George needing to point.

After observing the visual effect in Alberta, Krazy George did a few trial runs for the wave at small high school sporting events, such as in 1980 at Santa Clara where he stood mid-court at a game and had the audience stand when he pointed to them.  He then spun in a circle, getting them to do a perfect wave. This worked well, but of course he wouldn’t be allowed to stand in the middle of the baseball field, so improvised at the A’s/Yankees game. As he said, “I don’t know why it hit me. About the second inning, I said, ‘I want to try this thing.'”

On the other side of things, Weller claimed that the cheerleader squad at UW had been doing various forms of the wave at UW games for a few years, including a vertical wave with it starting in the front row, and progressing backwards to the nose-bleed seats.  However, Weller didn’t claim to get an audience to do the horizontal wave we know today until the aforementioned October 31, 1981 game.

As for how he thought it up, Weller claimed inspiration simply struck on that fateful day. However, given Krazy George had initiated a wave two weeks before on a nationally televised Major League Baseball playoff game, it’s generally thought Weller simply borrowed the idea from seeing it at that baseball game.  Needless to say, today there is generally little debate over who was the real inventor of the wave, even from University of Washington representatives who initially staunchly backed Weller’s story, but now not so much.

That said, while they may not have invented it, the UW certainly helped popularize it. The wave became a staple of Huskies games starting in 1981. It soon spread to Seattle Seahawks and the University of Michigan games. From the University of Michigan, it ultimately spread to Detroit Tigers games in 1984, a season in which they won the World Series, resulting in the wave getting even more national attention. Krazy George also started leading the wave regularly at the various sporting events he was hired to cheer at, doing his own part in popularizing his invention.

You might be wondering at this point why this group-cheer is generally called the “Mexican wave” outside of the United States when neither Krazy George, Weller, nor the University of Washington have anything inherently to do with the United Mexican States. This is thanks to the 1986 FIFA World Cup in Mexico, where the rest of the world was popularly introduced to the wave. As for calling it just the “wave” in North America, it’s not clear who first called it such; it wasn’t Krazy George.  He concedes the name was probably given to this form of cheering by someone at the University of Washington or in the Seattle area.