July 22, 2014 Sarah Stone
Gloria N. asks: Why is the stereotype to give apples to teachers? 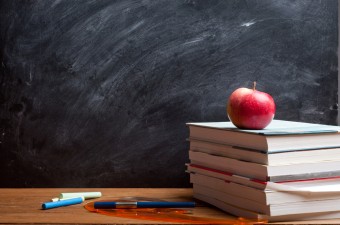 Widespread publicly funded, mandatory education has only been around since about the 19th century. Before then, the responsibility of providing schooling to children fell primarily on their families. Upper- and middle-class families tended to hire tutors or send their children to a private school run by a schoolmaster. That didn’t mean the children in lower-class families missed out on learning how to read and write. They often learned this at home, through apprenticeships, or at church-funded schools.

In addition, some poor families scraped together enough money to pay for their children to receive an education. Some even worked out a barter arrangement with teachers where they paid with surplus produce from the family farm. For instance, poor students from farming families in Denmark and Sweden often brought baskets of potatoes or apples to school as payment, among other staples (the potato being used for food, and the apple generally used for making drinks at the time).

In the United States, things changed when various social reforms came about in the 1800s. The reforms addressed issues ranging from food sanitation, treatment of the mentally ill, and even education. Schools became publicly funded and subject to regulations in order to ensure that all students were more or less getting the same educational opportunity.

By 1913, a majority of the states in the United States of America required that schools be paid for by the government. However towns on the sparsely settled western frontier still often bore the responsibility for paying for a teacher in the town. As before, they recruited teachers, and they provided a schoolhouse where classes could be held, a place for the teachers to live, fuel for heating, and often food. In these sorts of arrangements, students were also often tasked with helping the teacher maintain the schoolhouse, such as gathering on Saturdays to give it a thorough cleaning.

That tradition of bringing food to teachers continued even as the United States government took over the responsibility for funding public education in the West. The baskets of food were eventually replaced with smaller amounts as the old “Boarding Round” room and board pay system was replaced by more in the way of a cash salary.

But why do schoolchildren traditionally give apples to their teachers? As mentioned, there are records of students from such places as Denmark and Sweden bringing both apples and potatoes to their teachers, among other things, so why don’t students traditionally give potatoes to teachers? There are two generally accepted answers, one or both of which possibly contributing to this tradition over other food items like the potato.

For the first theory, teachers were often seen as a moral influence into the lives of children. (Indeed, the “Boarding Round” system often insured that teachers toed the line with the community’s moral standards- teach something outside of this, and suddenly see something like your food or heating fuel payment disappear.) Along with this, the “Tree of Knowledge” in the story of Adam and Eve in the Book of Genesis has often been mistakenly referred to as an apple tree. This is partially thanks to Aquila Ponticus, who was a second century translator translating the Old Testament from Hebrew to Greek.  He took the liberty of referring to the Tree of Knowledge as an apple tree, even though the original text doesn’t say that.  It’s likely that he chose this due to the fact that he was translating it into Greek for Greeks and that in Greek mythology apples were seen as symbols of desire and destruction.

Due to the prevalence of this “Tree of Knowledge” / apple tree idea, it wouldn’t be an out of place gift, then, for students to give their teachers an apple, the fruit representative of knowledge.

On to the second popular theory for the continuance of giving apples- apples arrived in North America shortly after the Jamestown Colony was founded in the early 1600s. These apples, unlike the ones found in supermarkets today, tasted bitter, but they could be used to make hard apple cider. Many people, whether rightly or wrongly, considered hard cider a safer beverage than water because widespread sanitation of drinking water did not yet exist. Apple trees also flourished in a variety of climates, contributing to the popularity of the fruit.

The sweeping social reforms that allowed schools and education to become regulated also posed a major problem for apples. The temperance movement that spanned from the mid-19th century to the early 20th century sought to eliminate the drinking of alcohol in the United States. Apple growers scrambled to re-brand the fruit in order to remove themselves from the controversy. Careful cultivation caused the fruit to lose its bitter taste and to become sweeter and sweeter with each new generation of apples.

Marketing campaigns also played a part in the apple’s new image. Phrases like “An apple a day keeps the doctor away” were dusted off and used to brand the apple as a healthy snack. So the theory goes that students and their parents who wanted to get on a teacher’s good side saw apples as a way to give the teacher a healthy, cheap snack, which was also quite versatile, able to be used now for both drink and a sweet treat. Thus, they chose to keep giving this food item, rather than something like the potato.