This Day in History: July 2nd 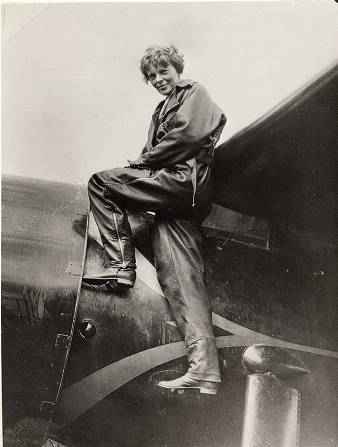 Legendary pilot Amelia Earhart (also known as “Lady Lindy,”) thrilled the aviation-crazy public of the ‘20s and ‘30s with her ground breaking accomplishments. She was the first woman to fly over the Atlantic Ocean in 1928 (as a passenger, but went on to do the trip solo as well), and became the first aviator in history to cross both the Atlantic and Pacific Oceans. Unfortunately, during her most daring flight, an attempt to circumnavigate the globe along the equator, the aircraft carrying Amelia and navigator Frederick Noonan was reported missing on July 2, 1937.

Earhart was almost 40 years old when she embarked on the most epic challenge of her career in March of 1937. On the first leg of the trip, the landing gear of her Lockheed Electra failed on arrival in Hawaii. It took two months to repair the damage, after which she and navigator Noonan switched direction to start a new attempt and headed for Puerto Rico. Once there, Earhart spoke to reporters, saying:

I have a feeling there is just about one more good flight left in my system and I hope this trip is it. Anyway, when I have finished this job, I mean to give up long-distance ‘stunt’ flying.

Earhart and Noonan made it to New Guinea about six weeks later and from there they set out for Howland Island, a refueling station for planes roughly 1,650 miles southwest of Hawaii. Amelia radioed several times as she approached the island, with one of the last transmissions being so strong that the crew aboard the ship, Itasca, receiving her signal near the island thought she must nearly be right on top of them.  However, they were unable to transmit on a voice frequency that she could receive on.  They were eventually able to get a Morse code message to her, but it wasn’t sufficient for her to triangulate her position relative to the ship.

Numerous theories have abounded as to Amelia’s fate since July 2, 1937. Some conspiracy-minded folks suggest the trip was an excuse for espionage (if so, it couldn’t have been any less secret), and that Earhart was spying on and photographing Japanese military installations and was caught and executed. Others believe she was the prisoner of Emperor Hirohito and was imprisoned in his palace in Tokyo.

And there are those that insist that after the war Amelia changed her name to Irene Bolam and moved to Bedford Village, New York. Only problem was the real Irene Bollam took serious issue with this to the point of suing the author of the book who put forth this theory.

Some say the whole event was staged to give Earhart to the opportunity to retire (seems a bit overboard, no?)

And finally, there are still others that argue Earhart and Noonan managed to survive the crash – at least for awhile – and they eventually died on some uncharted atoll of exposure, starvation, thirst, illness, or some other result of being stranded.

Amelia’s sister, Muriel Earhart Morrissey, gave enough credence to the first theory that she wrote to Emperor Hirohito for reassurance that Japan had nothing to do with Amelia’s disappearance. She received a note assuring her that that there was no credence to the rumors of Japan’s involvement. In her book “Amelia, My Courageous Sister,” she wrote: “We knew in our hearts that she wasn’t a spy, but a lot of people thought she was.”

She also rightly states that the most probable cause of the disappearance is simply that Amelia ran out of fuel and ultimately crashed into the ocean.

While significant money and efforts are still being expended even to this day to discover the ultimate fate of Earhart and her navigator, this is likely to remain one of the great unsolved mysteries of the modern age. Nevertheless, her contribution to aviation and her pioneering spirit as a source of inspiration to young women is a legacy that will live on forever.