This Day in History: July 28th 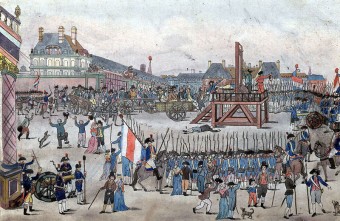 On July 28, 1794, the man who was once the hero of the French Revolution suffered an astounding fall from grace. His zealousness and tireless devotion to “The Cause” made him the obvious choice to lead the Revolution during its most radical phase known as the Reign of Terror. Ironically, the very qualities that led to his domination were also the cause of his damnation.

Maximilien Robespierre born in 1758 in Arras, France. He studied law, and was elected as a representative of the Arras commoners in the Estates General in 1879. Robespierre became a leading member of the Revolutionary body when the Third Estate became the National Assembly. His political stance was democratic and radical – he even believed in the abolition of the death penalty. He’d change his mind on that one quick enough.

In July of 1793, Robespierre was elected to be one of the 12 members of the Committee of Public Safety, which was formed to protect France from her enemies, both foreign and domestic. In October, the Committee passed the Decree on Emergency Government, which for the first time in history proclaimed terror as an officially sanctioned and legal government policy.

Robespierre justified the use of coercion and violence during the Revolution this way during a speech he gave in February 1794:

If the basis of popular government in peacetime is virtue, the basis of popular government during a revolution is both virtue and terror; virtue, without which terror is baneful; terror, without which virtue is powerless. Terror is nothing more than speedy, severe and inflexible justice; it is thus an emanation of virtue; it is less a principle in itself, than a consequence of the general principle of democracy, applied to the most pressing needs of the patrie.

The Reign of Terror had begun. Within a year, 300,000 suspected enemies of the Revolution had been arrested, 10,000 more died as prisoners, and 17,000 had a date with the guillotine. Included among these unfortunate souls were many who had proven to be a pain in the Robespierre derriere. Even the King and Queen, Louis XVI and Marie Antoinette, got bumped off. (See Marie Antoinette Never Said “Let Them Eat Cake”)

On June 4, 1794, Robespierre was elected by a landslide to be president of the National Convention. Within a week, a law was passed that suspended a suspect’s right to both legal assistance and a trial. The executioner got quite a work-out as 1,400 enemies of the Revolution were guillotined with one month.

The French people had finally had enough. Robespierre was hardly the only one responsible for the bloodshed of the Terror, but he was the one that fate – and the other guys on the Committees – had decided was going to take the fall for it.

On July 27, 1797 Robespierre and his allies were declared outlaws. When he heard the news, Robespierre fled to the Hotel de Ville and attempted suicide by shooting himself in the head, but only managed to injure his jaw. Not longer after, he was apprehended by troops of the National Convention.

In the Place de la Revolution the next evening, Maximilien Robespierre was executed by guillotine without a trial along with 21 others. His final moments must have been excruciating both physically and mentally. Right before his execution, the bandages holding his jaw together were roughly ripped off. Worse still, he met death head-on – he was face-up watching the blade come at him in his final moments of life.