This Day in History: July 29th 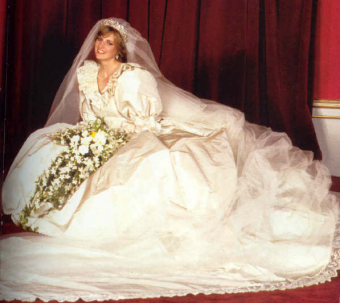 On July 29, 1981, the Fairytale Wedding of the Century took place at St. Paul’s Cathedral in London. The handsome prince stood at the altar awaiting his young and beautiful blushing bride who had won his heart over all the other girls in the kingdom. The Lady arrived at the church a mere commoner, but when she departed the Cathedral at the side of her new husband, she had been transformed into a Royal Princess.

This was what the 600,000 people lining the streets of London and the additional 750 million watching at home wanted to believe was happening that July morning. The fairytale was what they had slept curbside for, or had set their alarms to go off in the middle of the night to witness. And, at least visually, that’s exactly what they got.

When Charles, the Prince of Wales and heir to the British throne married Lady Diana Spencer, it was a Very Big Deal. The 20-year-old bride would someday be Queen of England, so this was no ordinary wedding. Diana traveled to St. Paul’s with her father Earl Spencer in a glass coach right out of Cinderella. When she emerged to cheering crowds, she looked every inch a Disney Princess.

Diana’s elaborate ivory wedding dress (let’s just say it screamed 1980s) was a profusion of poufs and frills, decorated with sequins, lace, and thousands of pearls. Its train was 25 feet long. Some thought it looked like crumpled Kleenex when she exited the carriage, which seems a pretty accurate assessment. Nevertheless, Diana herself looked lovely.

Aside from all the formality, there were very human moments during the ceremony as well. Diana flubbed her new husband’s names during her vows, calling him “Philip Charles Arthur George,” and Charles referred to “thy goods” during his own vows as opposed to “my worldly goods.” (His sister Princess Anne supposedly made a quip later privately about her brother doing that on purpose.)

There were even aspects of the nuptials that were seen as modern, at least by royal wedding standards. The bride left out the word “obey” from her vows, which caused quite the hoopla at the time, and when the newlyweds appeared on the balcony of Buckingham Palace before throngs of cheering well-wishers waving Union Jacks, they actually *gasp* kissed in public!

Unfortunately, the fairytale had started to unravel before the bride had even walked down the aisle. Diana became suspicious of Charles’ relationship with his former girlfriend Camilla Parker Bowles and she told her sisters she was considering backing out of the wedding, but they told her it was too late, as her “face was already on the tea towels.”

Charles, who at 32 had been coerced into finding a suitable bride and settling down, no doubt figured that once married he and Diana would churn out an heir and a spare, get together for State and family functions, and quietly live separate lives – as was common practice among royalty and the aristocracy. This was not, however, what Diana had signed on for.

This fundamental misunderstanding between the two would lead to untold misery for both as the marriage progressed and finally disintegrated into an epic embarrassment of mutual adultery, public name-calling and grandstanding that the Royal Family would never completely recover from.