This Day in History: July 25th 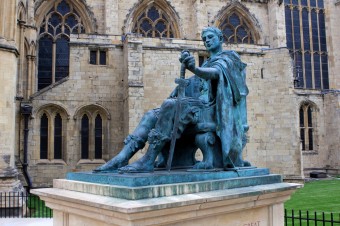 Constantine the Great is probably best remembered for being the first Christian Roman emperor, but he was a ruler of historical significance for other reasons as well.

When Constantius was appointed as one of the two caesares, or junior emperors, of the Tetrarchy in 293, his son Constantine went to Nicomedia to serve in the court of Diocletian as his father’s heir presumptive. In 305, the Augustus Maximian abdicated, leaving Constantius as the head honcho in Rome.

Only a year later, Constantius fell ill while fighting the Picts and Scots in Britain, and he died in York, England on July 25, 306 C.E. His son was at his side, and the general Crocus along with the troops loyal to his father’s memory and wishes proclaimed Constantine an Augustus (“Emperor”).

But Constantine couldn’t just sit on his laurels. He would have to fight for the title against other factions, including Maxentius, the son of Maximian. In 312, Constantine met Maxentius and his men on the Tiber River at the Milven Bridge.

According to legend, before the battle Constantine had a vision assuring him he could take the field, but only under the protection of a Christian symbol. Constantine had the emblem he had supposedly seen in his vision painted on his soldier’s shields and, sure enough, they won the battle and triumphantly entered Rome.

Constantine was now, without question, the Western emperor. He used his new-found power to issue the Edict of Milan, which decriminalized Christianity and returned confiscated property to the church.

For a few years, Constantine was content to cool his heels as Licinius ruled as the Eastern Roman Emperor. But by 324 C.E., after Licinius reneged on his former agreement not to oppress Christians, Constantine’s patience had run out and after a series of battles, Licinius was defeated. Finally, Constantine was sole ruler of a reunited Roman Empire. To celebrate, he established the city of Constantinople.

As before, he continued to use his reign to further the interests of the Christian Church. He arranged and presided over the council of Nicaea in 325 C.E., which established certain Christian doctrine – such as nailing down the matter of the divinity of Christ.

Constantine also tended to more earthy matters such as his army, which underwent a complete overhaul during his tenure. These changes made facing such foes as the Sarmatians and Visigoths a much easier proposition.

The Emperor was in Helenopolis planning an attack on Persia when he became ill. Constantine decided to head back to Constantinople, but his condition worsened and he had to abort his journey. He had yet to be baptized in the Christian faith – no-one was quite sure why – but underwent the rite on his deathbed.

Constantine the Great died on May 23, 337 C.E at approximately age 57 near Nicomedia, where he had spent so much time early in his career. He was eventually made a saint of the Christian Orthodox Church.