This Day in History: July 17th 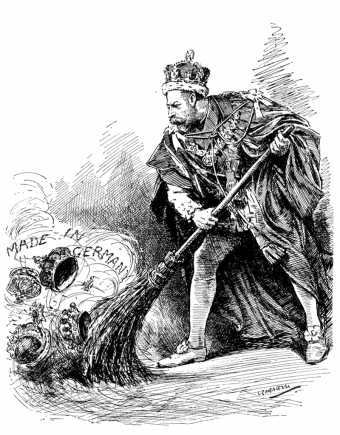 By the summer of 1917, the British Royal family was in quite a pickle. Although King George V was the reigning monarch of the Great Britain, his ancestry was almost entirely German, and during World War I anti-German sentiment among the British people was verging on hysteria. German-owned stores were destroyed, and the famously canine-loving Brits even killed German breeds of dogs.

The King’s ties to Germany were not shrouded in generations past either – several of his sisters were married to German princes and the much despised Kaiser – Willy to King George and his family – was his first cousin. In 1914, King George had made the mistake of not stripping the Kaiser of all his British honors of chivalry or honorary commands of British regiments. It was the last time the King would bend to family loyalty.

After three years of war, revolutionary feeling was high in Europe, and monarchies were being deposed with frightening rapidity. In Russia, the Czar and his family were taken prisoner in 1917, which was especially hard on King George as both the Czar and the Czarina were also his cousins, and he was powerless to help them and their family. They were executed in 1918.

The final straw was when George V heard that H.G. Wells allegedly accused the King and his court of being “alien and uninspiring.”

“I may be uninspiring but I’m damned if I’m an alien!” The King retorted.

Clearly changes were in order. George V called upon his advisor Lord Stamfordham, and they decided their first priority should be finding a suitably British name for the Royal House.

As close as they could figure, their current family name was Saxe-Coburg-Gotha – just a wee bit too German. As far as their surname went, Royalty never used them, so they asked the College of Heralds to see what they could come up with. The only possibilities they dug up were Wipper or Wettin, which were dismissed as too comical.

They then came up with the idea of inventing an entirely new surname that sounded as British as Big Ben, the Thames River or …Windsor Castle.

The name Windsor was perfect. There was no existing British title bearing that name, it was British as could be, and it just sounded royal. Windsor Castle was built by William the Conqueror, is the oldest occupied castle in Europe, and personifies a millennium of unbroken British Royal history. We have ourselves a winner.

So on July 17, 1917, the British Royal family officially became known as the Royal House of Windsor.

King George’s cousin the German Kaiser seemed bemused by all of this, and remarked that he planned to attend a performance of Shakespeare’s play “The Merry Wives of Saxe-Coburg-Gotha.”

The King insisted all other members of the Royal family anglicize their names and renounce any German titles. His Majesty eased the transition by giving British titles to family members, but there were some who gave up (German) royal status to become mere nobility. Too bad, so sad, sayeth the King.

There are many people who don’t realize that the House of Windsor, styled as such anyway, isn’t even a century old. Undoubtedly this would please King George V immensely, who would feel vindicated at picking such a British – and timeless – name for his Royal House.