This Day in History: July 15th 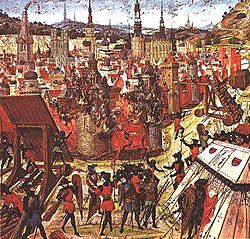 “Christians, hasten to help your brothers in the East, for they are being attacked. Arm for the rescue of Jerusalem under your captain Christ. Wear his cross as your badge. If you are killed your sins will be pardoned.”

These were the words spoken by Pope Urban II calling for all good Christian men to do battle against the Muslims to reclaim the holy city of Jerusalem. Many volunteered to take the dangerous journey to the Holy Land for a variety of reasons: the Pope had promised if they died their souls would go straight to heaven – no long layover in Purgatory or fear of hellfire – exemption from taxes, and anticipation of plunder.

The trip to Jerusalem was arduous to say the least. Since the Crusaders didn’t have access to any of the ports of the Middle East, the entire journey had to be taken by land. Through deep snow and scorching heat the Crusaders had to traverse many hundreds of miles first through Europe and then the Middle East. Many ran out of fresh water, and had to resort to drinking their own urine, and then sewage water or animal blood. Food was purchased from the local people en route, but the prices were set incredibly high.

Inevitably, disease weakened the Crusaders as they made their way to Jerusalem. Not surprisingly, dysentery was very common. Heatstroke effected many as Europeans unaccustomed to dealing with the brutal desert sun.

But many managed to make it to Constantinople in the fall of 1096. It was all a mish-mosh with no clear leadership – there were four main armies with numerous offshoot groups – perhaps a more formalized, structured army was an impossibility. Whatever the case, they besieged and took the important city of Nicea while its leader Kilij Arslan was out of town.

Then the Crusaders set their sights on Antioch, a heavily protected, fortified Turkish city. It took them seven months, but the Crusaders conquered Antioch as well.

The Crusaders attempted a frontal assault on the city on June 13, which was unsuccessful due to a lack of supplies. Four days later, much needed timber arrived to construct siege equipment. Over the next several days, the Crusaders alternately built siege towers (they had decided on two points of attack) and prayed.

When the Crusaders began their assault on the morning of July 15, 1099, it was just a matter of time before they overcame the Muslim defenses. Once the walls were breached, they opened the inner gate to the city and the Crusaders poured in as the Muslims fled in terror. The Muslim leader ad-Daula realized further resistance was futile and surrendered to Raymond, one of the Christian leaders, who offered protection.

However, the victorious Crusaders began massacring not only the defeated soldiers but also the Muslim and Jewish civilians, referring to this as a “cleansing” of the city. It also, of course, removed any threat to the conquering Christian forces and removed the owners of much of the loot. Pope Urban died on July 29, 1099 before the news could reach him.