This Day in History: July 10th 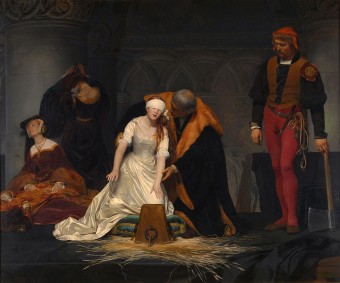 On July 10, 1553, Lady Jane Grey, the great-niece of King Henry VIII, ascended the throne of England as the result of a plot masterminded by John Dudley, Earl of Northumberland. Her “reign,” if you could call it that, lasted all of nine days until Mary Tudor and her supporters marched into London, and King Henry VIII’s eldest daughter took her rightful place as Queen.

During the reign of Henry’s precious, long-awaited son Edward VI (who was only nine when dear ol’ dad died), the entire kingdom of England was in turmoil. The religious strife that began decades before became even more divisive and heated. The Protestant Seymours, King Edward’s uncles who led the most powerful faction at court, were determined to find a way to keep the Catholic Mary Tudor, King Henry VIII’s eldest daughter with Katherine of Aragon, from ever gaining the throne.

Uncle Thomas Seymour hoped to orchestrate a marriage between his nephew and his ward, the firmly Protestant Lady Jane Grey, but his brother Edward, who was the young King’s regent, had other ideas. In any case, the point was moot as both brothers were executed for treason by 1552, and John Dudley, the Duke of Northumberland, was the new top dog at court.

Lady Jane Grey married Northumberland’s son, Lord Guilford Dudley, in 1553. Apparently Jane was not on board with this and married Dudley under extreme duress – forced to do so with physical beatings by her ambitious mother.

The Duke of Northumberland skillfully made himself indispensable to Edward VI and quickly won the young King’s trust and loyalty. When it became clear that Edward’s rule was to be a very short one, the Duke convinced the King to change the order of succession to prevent his half-sister Mary from returning England to the Church of Rome, something the fanatically Protestant Edward definitely did not want to happen. If the King passed his crown to Lady Jane, there would be no such worries with Jane and Northumberland’s kid on the throne.

Edward bought it, and signed on the dotted line.

King Edward VI, Henry VIII’s son who he had divided his country and committed murder to get it, died at the age of 15 on July 6, 1553. His cousin Lady Jane Grey, also 15, ascended the throne according to the recent change in the order of succession. On July 10, Jane was declared Queen Regnant, and no doubt to the Duke of Northumberland’s great displeasure, she refused to name her husband as King.

Meanwhile, Mary Tudor had gone to Norfolk were she was rallying support to make her claim as rightful Queen. The people of England made it clear they stood behind Bluff King Hal’s girl, and they easily overtook Northumberland’s army when they triumphantly swarmed into London on Mary’s behalf. The Duke, Lord Guilford Dudley, Lady Jane and their supporters were all imprisoned in the Tower and sentenced to death. Mary I was proclaimed Queen of England on July 19, 1553.

Queen Mary realized that Lady Jane and even Guilford were just kids being used as pawns by ambitious men, and commuted their sentence to life imprisonment in the Tower. But then in 1554, Thomas Wyatt led a Protestant rebellion against the Queen and called for the restoration of Lady Jane to the throne. If that wasn’t bad enough for poor Jane, her own father had taken part in the rebellion.

This put Mary in a really tough spot. It was now abundantly clear that as long as Jane remained alive she would be a rallying point for heretical uprisings. Even more damning in Mary’s eyes was the fact that Jane had refused the chance to convert to Catholicism when given the chance. The Queen saw no other choice but to sign death warrants for both Guilford and Jane on the grounds of treason.

Lady Jane Grey and Lord Guilford Dudley were executed at the Tower of London on February 12, 1554. Before she met her death, she told those present she never desired to be queen and that she died a “true Christian woman.” She was 16 years old.