This Day in History: July 11th 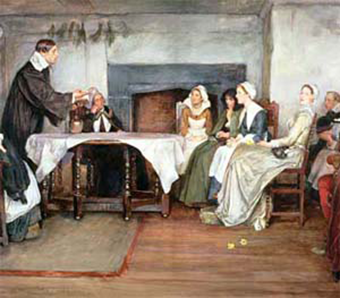 “Why was it that the coming of two women so shook ye, as if a formidable army had invaded your borders.” – George Bishop

On July 11, 1656, a ship called the Swallow docked in Boston Harbor in the Massachusetts Bay colony. On board were two women named Ann Austin and Mary Fisher, who had been in Barbados doing missionary work. Austin and Fisher were Quakers, and were the first of their faith to immigrate to the American colonies.

The Religious Society of Friends, commonly known as The Quakers, was a Christian religious sect formed in England in the 1650s. It was founded by George Fox to counter the formality and stringent rules of the Church of England. The Quakers believed in keeping it simple – no preachers, no formal ceremonies, and no official houses of worship. They were egalitarian, pacifist, abolitionist, and advocated sexual equality.

This went over like a lead balloon in Puritan New England.

The citizens of Boston and the Massachusetts Bay colony had heard all about the heretical Quakers from their horrified friends and family in the mother country, and they were certainly not going to put up with such shenanigans in America. After all, they crossed an ocean and braved the wilderness to live under a strict theocracy not possible under English law, and they weren’t going to tolerate any interlopers trying to muck things up.

So, the very second Ann Austin and Mary Fisher set foot on American soil they were arrested and imprisoned. Their books and tracts were confiscated, and the local executioner burned them all in the town square. Both women were stripped and searched for witch’s marks, an ordeal Ann later said was more painful than birthing any of her five children.

Austin and Fisher were locked up for five weeks in a dark cell and ordered to be given no food or water. If not for the kindness of Nicolas Upshall, the owner of the Red Lion on Boston’s North Street who bribed one of the guards to slip the women some nourishment, both surely would have died, which was probably the plan.

And in the No Good Deed Goes Unpunished File: Upshall was busted in October of 1656 for his role in aiding Austin and Fisher during their imprisonment. The records of the Court Assistants of the Colony of Massachusetts Bay state Upshall was: “Fined $100, and ordered to leave the colony within thirty days, and was sentenced to pay beside $15 for every day he should be absent from public worship before his departure–evidently that he might be compelled to listen to pulpit denunciations of his wickedness in saving from starvation two fellow-human beings who worshiped God in a different fashion from their persecutors.”

The real kicker is that his own wife provided testimony against him. (Guess he left the seat up one too many times.) The good people of Plymouth County denied him asylum, so he pulled a Roger Williams and threw himself on the mercy of the Native Americans, who treated him a whole lot better than his fellow colonists. He also became a Quaker.

And what of Ann and Mary? The captain of the Swallow, Simon Kempthorne, was ordered to return both women to Barbados, and if he refused, he was to be jailed until he complied. He complied.

Governor Endicott had been out of the state for all the excitement, but when he returned he expressed disgust with how it had been handled: “I regret my absence. I would have delivered a more a proper sentence to these vile heretics, and they would have not escaped without a good whipping.”