June 10, 2014 Karl Smallwood
James asks: Why does it hurt so much when you step on legos with bare feet? 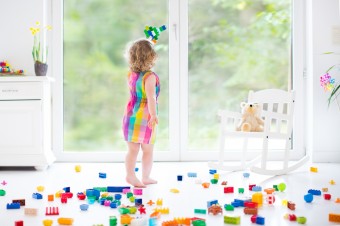 Right up there with how the gun on the original Duck Hunt game worked, why it hurts so much to step on a Lego brick is one of the questions we’re asked the most, so it’s high time we answered it. As anyone who’s done it knows, stepping on a Lego block is something akin to being shot in the foot by a knife soaked in wasp venom. In truth, this is an inherent danger of allowing a child to exist in your home.

While we’ll never know who was the first person to step on a Lego block and curse the day Kirk Kristiansen “borrowed” the idea of Lego bricks from the patented “Kiddicraft Self-Locking Building Bricks,” we can answer the question of why stepping on one of the little buggers hurts so much more than many other common household items. The answer partially lies in how insanely sensitive to pressure, pain and practically everything else our leg-hands actually are.

The soles of the feet are one of the more sensitive areas of the human body, right up there with things like the lips, genitals, eyes and hands in terms of how sensitive to touch and pain stimuli they are. If you’re wondering why our feet need to be this sensitive, it’s because our feet are constantly working to keep us balanced and the information from the nerves in them are vital for allowing the brain to adjust accordingly to keep a person from falling over.

But why is this such a major complaint of Legos and not so many other items? We mean, stepping on anything sharp and pointy is going to hurt, so why is it only Lego bricks that seem to be so often mentioned?  Well, according to Lego, there are enough Lego bricks to give every person on Earth 83 bricks each. So you’re bound to come in contact with one and, unlike sharp objects, people aren’t as careful to keep them off the floor; often that’s where kids play with them.  Just as important is that unlike many objects which tend to have some give to them when you step on them, a single standard brick of Lego can be subjected to approximately 4,240 Newtons of force before it deforms.

This means a single, lowly Lego brick can support weights in excess of 432 kilos (953 pounds) before it reaches its breaking point and compresses. So when you step on a Lego brick on a relatively solid surface, there is nowhere for the force you’ve just exerted to go but right back into your foot and into the huge cluster of nerves it contains. This is compounded by the fact that the bricks have little knobs, relatively sharp corners, and the soles of the feet are subjected to impact forces that can be equal to around 9 times our own body weight while moving; even walking slowly can produce impact forces equal to double your body weight.

For an example, a standard 2×2 Lego brick has a surface area of roughly 2.25 centimetres squared (for the sake of simplicity we’ll ignore the studs, which certainly aren’t going to help matters for your foot anyway). Let’s say a person weighing 75 kilos (165 pounds or 734 Newtons) steps onto it.

Now, the pressure on a given object is equal to the force applied divided by the area over which it is spread (P=F/A).  So even if that 75 kilo person were just standing on the Lego with one foot, rather than having their foot accelerating downward at some rate as with walking, this gives us 734 N/0.000225 m2 = roughly 3,262,222 pascals of pressure! For reference, that is roughly 32 times standard atmospheric pressure, all suddenly forcing its knobbly, unforgiving way against one of the most sensitive regions of the body.

Of course, part of the rest of your foot will ultimately support some of your weight on the floor, taking quite a bit of the pressure off once that happens.  On the flipside, your foot will be stomping at some force downward skewing things the other way significantly (as mentioned, even walking slowly, the impact force can easily equal double your body weight, let alone if you’re walking quickly); so this is just a very rough calculation, that nonetheless demonstrates how stepping on a Lego brick can produce some relatively large forces on the area of the foot the Lego brick is contacting.

So, to answer the question posed, the reason stepping on a Lego brick hurts so much is a combination of how sensitive the nerves in our feet are, how much force our feet hit the ground with as we walk, and the fact that Lego bricks are extremely rigid, somewhat jagged, and small, ensuring that the force is efficiently directed back into a tiny area of your foot. May God have mercy on your soul if you step on a Lego brick that is on a tiled, rather than carpeted, floor.