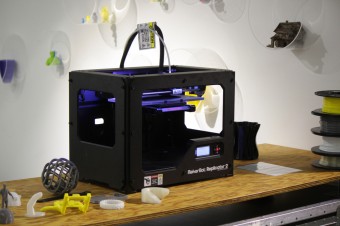 Originally built on the same technology as an ink jet printer, the basic process behind 3D printing is so easy to understand, replicate and implement, today it is used to manufacture everything from toys to body parts.

Fundamentally, 3D printing involves building an object by putting down successive layers of materials, such as powders, liquids, plastics, metals and ceramics and making them adhere to each other. This form of additive manufacturing starts by creating a three-dimensional model using computer-aided design (CAD).

There are many 3D manufacturing methods. These are among the most popular.

Like an ink jet, with direct 3-D printing, nozzles spray a liquid material over a surface. In 3D printing, either or both the nozzles and the printing surface move about while the material is being applied in successive layers. This method is very popular for rapid prototyping (RP).

Similar to direct 3D printing, Binder 3-D printing combines glue (the binder) with a fine powder: “The first pass rolls out a thin coating of the powder, and the second pass uses the nozzles to apply the binder. The building platform then lowers slightly to accommodate a new layer of powder, and the entire process repeats until the model is finished.”

One common method, stereolithography, uses an apparatus (SLA) with: “Four main parts: a tank . . . filled with liquid plastic (photopolymer), a perforated platform that is lowered into the tank, an ultraviolet (UV) laser and a computer controlling [everything. First] a thin layer of photopolymer . . . is exposed above the . . . platform. The UV laser hits [it] . . . “painting” the pattern of the object being printed . . . . The UV-curable liquid hardens . . . the platform is lowered [again], exposing a new surface layer . . . . The process is repeated again and again until the entire object has been formed.”

Selective laser sintering (SLS) and selective laser melting (SLM) also shoot beams of light, but on thin layers of powder, rather than liquid, on top of the building platform: “[The] laser, which is controlled by a computer that tells it what object to “print,” pulses down on the platform, tracing a cross-section of the object onto the powder. The laser heats the powder either to just below its boiling point (sintering) or above its boiling point (melting), which fuses the particles in the powder together into a solid form . . . . The process continues again and again until the entire object has been printed.”

Direct metal laser sintering (DMLS) is a popular variant of this method.

Fusing together successive layers of paper, plastic or, occasionally, metal, and then cutting the finished product to the desired shape, laminated object manufacturing (LOM) works as follows: “A continuous sheet of material . . . is drawn across a build platform by . . . rollers. . . . To form an object, a heated roller is passed over the sheet of material on the building platform, melting its adhesive and pressing it onto the platform. A computer-controlled laser or blade then cuts the material into the desired pattern.”

Fused deposition modeling (FDM) extrudes thermoplastic material, which is: “Fed from the 3D printer’s material bays to the print head, which moves in X and Y coordinates, depositing material to complete each layer before the base moves down the Z axis and the next layer begins.”

Many 3D printing methods leave a residue, but most of these are either brushed, broken or washed off with detergent and water.

As the technology gets more affordable (small 3D printers are even now available for fairly reasonable prices), new 3D applications are being announced almost daily. Here are a few of my favorites:

Recently both plastic and metal handguns have been manufactured using 3D technology.

The plastic model, called the Liberator, was tested by the Bureau of Alcohol, Tobacco and Firearms (ATF), although the agents were not impressed: “One, they do work. Two, they’re not reliable, and three, they’re undetectable. And that’s a safety and security issue because they can make their way into secure facilities.”

The metal handgun, a replica of the Browning 1911 pistol, was manufactured via DMLS, is constructed of “over 30 3D printed components [and]  . . . is capable of hitting a few bulls eyes at over 30 yards.”

At Glasgow University, researchers are developing “downloadable chemistry, with the ultimate aim of allowing people to ‘print’ their own pharmaceuticals at home.” Knowing that most drugs are comprised of a few simple ingredients like oxygen, carbon, paraffin and vegetable oils, Professor Cronin thinks it could be as easy to fill your own prescription, as it is to follow a recipe (albeit one written by a pharmaceutical company).

This begs the question: if we can print prescriptions at home, what’s to stop us from printing illicit drugs? The short answer is – nothing: “Once we all get atomic-level 3D printers, we can just build our own pills at home. Then “controlled substance” will finally be completely uncontrollable.”