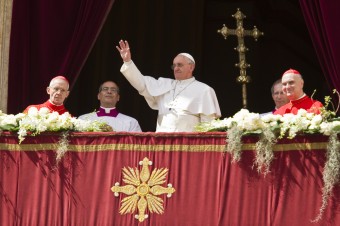 When a pope goes to his eternal reward or otherwise retires, there are certain traditions that are dusted off each time to elect his successor. Only the British royal family can rival the Vatican when it comes to (seemingly) ancient and elaborate rituals, so you know it’s going to be a big production. For those of you who grew up eating meat on Fridays and not caring if your soul was in a state of mortal sin, let’s break down the pope-picking process.

It should first be noted that the exact rules regarding the election of a new pope have been tweaked numerous times over the centuries. (At one point it was even common to do things like deprive the Cardinals of pay, rooms of their own, and anything but bread and water if they were taking too long; the roof over the Cardinals’ heads was even removed during the 1269 election to try to entice them to speed things up). But in general, immediately following the death of the pope, all the cardinals are called to Rome by the College of Cardinals, which has jurisdiction over the church until a new successor of St. Peter is chosen. The cardinals, who are the guys who get to wear those snazzy red robes and cool hats but are otherwise just bishops with some extra responsibilities, gather for a conclave, which entails them all being locked in an area of the Vatican until they elect a new pope. Before this, however, the cardinals attend what are called general congregations, where the current state of the church and the best qualities for a new pontiff are discussed prior to any voting.

About 2-3 weeks later, it’s time for the actual conclave- the word coming from the Latin “cum clave” or “with the key,” as in “locked with a key.”  (This seclusion was originally instituted to combat the prevalent practice of various political entities trying to influence the vote.)  After everyone hears Mass, during which the help of the Holy Spirit is sought in choosing a new pope, the Cardinal Dean presides over the preliminaries, which includes going over any proceedings that will touch on canon law. Then, all the cardinals are locked away where they will go through potentially several rounds of voting until a new pope is elected.

Only cardinals under the age of 80 are allowed to participate, and all swear an oath of absolute secrecy before the doors are sealed behind them. To assist in the process, nine cardinals are chosen randomly, three that will act as voting judges, also known as scrutineers, three that will collect the absentee ballots of cardinals too sick to attend, and finally three revisers who double-check the work of the scrutineers.

In general, a two-thirds majority was the requirement for a candidate to take the election. Pope John Paul II changed this rule in 1996, so if after 33 votes a clear winner is still not apparent, a simple majority is enough to pick a winner in the following vote. Of course, with this method, a simple majority on round one of voting followed by the Cardinals in question not changing their votes for the subsequent rounds meant that the previous absolute majority would never be needed.  Needless to say, this rule didn’t last and was rescinded by Pope Benedict XVI in 2007, which brought us back to the two-thirds majority.

For each round of voting, the cardinals are given cards with the words Eligo in summum pontificem (“I elect as supreme pontiff”) on them. Each man jots down his choice, folds the card twice, and then, by order of seniority, casts their ballot in a chalice by Michelangelo’s “The Last Judgment” while saying, “I call as my witness Christ the Lord who will be my judge, that my vote is given to the one who before God I think should be elected.”

Technically, the cardinals can elect whomever they see fit, provided the candidate is a male that has been baptized. There actually have been times when laymen were elected to the Catholic Church’s highest office, but that hasn’t happened in over five hundred years. When it did occur, the pope-to-be had to be immediately ordained first as a priest, and then as a bishop. In practice, it’s virtually always a cardinal who is raised to the position of pope.

When all the ballots are cast, the receptacle holding them is given a good shake to mix the contents up. A scrutineer then puts the ballots in a new container, and counts them to ensure the number of ballots match up with the number of voting cardinals. The ballots are counted out loud, and the results are noted by the three cardinal scrutineers designated for that purpose. Each ballot is then poked with a needle and hung from a thread, securing them all in one place prior to burning. (This seemingly could all be sped up significantly by a little modernization, perhaps a Pope Voting App is in order.)

Traditionally, ballots were burned dry to create white smoke, and with damp straw to create black, but one time too many the faithful were confused by inconclusive grayish smoke. So now after each round of voting, the ballots are burned using chemicals to create either black smoke (no pope), or white smoke (new pope). These days bells are also rung when the pope is elected, just to make it perfectly clear.

When a new pope is finally elected, the pope-elect is asked if he accepts the honor. If he’s cool with it, he immediately becomes pope and Bishop of Rome to boot. Then, one by one, the cardinals all pledge their love and support to the new pontiff, who then chooses what name he will go by as pope. Once that is established, the new pontiff’s name is announced to the throngs of people awaiting the news outside, and the entire world. Everyone cheers and sings, and things soon go back to business as usual – until the next time the Grim Reaper shows up, or (very rarely) the pope simply steps down, such as happened in 2013 when Pope Benedict XVI resigned citing poor health.  To give you an idea of how rare this is, the last to do so was all the way back in 1415 when Pope Gregory XII stepped down, though not exactly of his own volition.  The last to step down without outside pressure was Pope Celestine V who did so in 1294.