June 19, 2014 Kathy Padden
Karla asks: Why do graduates wear caps and gowns? Also, why do we throw our caps in the air when we graduate? Inquiring minds want to know!!! 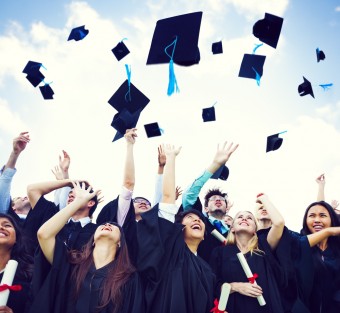 Wearing academic robes is a tradition that dates back to at least the 12th century, around the time when the first universities were being founded in Europe. During this time, most scholars were also clerics or aspiring clerics, and excess in apparel was not encouraged. As such, in the beginning it is thought that there was little difference between what the academics were wearing and the laity, excepting that the academics and clergy tended to wear very plainly colored garb.

Beyond that, the clothing was simply practical. When the universities were originally formed, they had no official buildings of their own to hold lectures in, so classes typically gathered in nearby churches. Their simple robes and outer covering served the purpose of keeping them warm in the drafty medieval church buildings, and the hoods kept the weather off when they ventured out of doors.

The earliest standardization of academic garb occurred as a byproduct of a 1222 edict by Stephen Langton at the Council of Oxford, where it was declared that all clerks should wear a form of the cappa clausa, a long cape typically worn over a robe. In short order, this became thought of as a mark of an academic as the newly minted universities adopted it for the aforementioned reasons, while at the same time the clergy in general (outside of academic contexts) over time wore it less and less. By 1321, this ultimately lead to the University of Coimbra mandating that plain gowns be worn by Licentiates, Bachelors, and Doctors. By Tudor times, more or less this same basic standard had been set for academic dress at Oxford and Cambridge.

Gradually more comfortable versions were adopted keeping a version of the robe, but without the thick outer layer. As for coloring, things remained very plain, generally black. Certain colors weren’t designated to represent specific areas of study until a few centuries later in the late 1800s, with the standards varying from country to country and in many cases university to university.

So that’s the gowns, what about the goofy looking caps, or mortarboards? 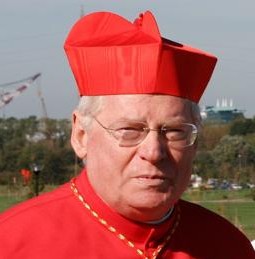 The mortarboard is called such due to it resembling the flat board used by bricklayers to hold mortar (called a ‘hawk’). The cap is simply a square, flat board fastened to a skullcap with a jaunty tassel fastened to its center. Some historians suggest the mortarboard is the descendant of the biretta, which was headgear often sported by Roman Catholic clerics, scholars and professors. This, in turn, probably derives from common pileus (brimless hat) worn by the laity. The wearing of this hat was first ordered in 1311 by the Church at the Synod of Bergamo, spreading from there as standard headgear by clerics.

By the 15th century, the mortarboard cap was incorporated into the standard garb for many scholars, among others. It was initially not generally undecorated as today (other than the tassel), but early versions could feature elaborate embroidery and adornments.

Further, in the early days at some universities, the mortarboard was reserved for those who had earned the title of “master” or “doctor.” As explained by French historian Jacques Le Goff:

Once he had passed the examination, the candidate became licensed, however he could only possess the title of “doctor” and teach as a Master following the public examination … In this way, he assumed for the first time the role of the Master in a university setting. After this, the archdeacon ceremoniously conferred upon him the authorization to teach, along with the symbolic regalia appropriate to his function: a professorial chair, an open book, a golden ring, and the mortar board or cap.

Today the bar is not set quite as high, and all grads are typically entitled to mortarboards in regions where they are worn.

The tradition of the graduating class throwing their caps in the air at the end of the ceremony has a relatively recent genesis. The first known instance of this was in 1912 at the U.S. Naval Academy in Annapolis, Maryland. There are slightly conflicting accounts as to the reason they did this, but the general story is that it is because the Academy decided to give them their officers’ hats at the graduation itself.  Thus, the graduates chucked their midshipmen’s caps in the air upon graduation, and ceremoniously placed their officers’ hats on.  Unfortunately, how that ended up catching on with other universities has been lost to history.

So from medieval abbeys where the style of dress was more or less just a version of what most people wore in parts of Europe at the time, to modern high school gyms where the garb is decidedly out of place outside of certain ceremonies, caps and gowns have continued to denote academic accomplishment, with no sign of the tradition letting up any time soon.