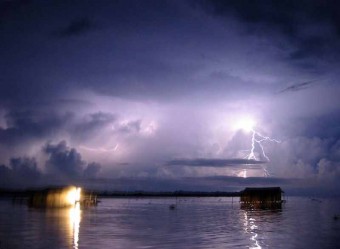 In Venezuela’s northwest state of Zulia, where the Catatumbo River empties into the southwest corner of Lake Maracaibo, a spectacular light show can be seen most nights of the year. Known alternately as the Catatumbo lightning, river of fire in the sky, Beacon of Maracaibo, everlasting lightning, the Lighthouse of Catatumbo and Relámpago del Catatumbo, this fixed lightning storm has been illuminating the night sky for as long as anyone can remember.

Although the phenomenon is believed to be far older, the first written record of the storm was made by Lope de Vega in his 1597 work “The Dragontea.” In the poem, de Vega recounted how the lighting illuminated Sir Francis Drake’s fleet, which was attempting to launch a surprise attack on the town of Maracaibo. Drake was defeated.

Reports of the frequency of the lightning storms vary from 140 to 300 nights a year; when the storms do come, they flash for several hours at a time.

The number of strikes is staggering, with typical storms flashing up to 280 times each hour. Some estimate that the river of fire in the sky can generate over 1,000,000 strikes each year. In fact, Guinness has awarded the region the world record for most lighting flashes at 3,600 per hour.

The storms do ebb and flow with the seasons, though, and the Beacon of Maracaibo is most active at two times of the year: in May (at the beginning of the wet season) and in October (at its end). During the region’s dry season, particularly in January and February, lighting storms are less frequent and have been known to stop altogether.

One such cessation happened in January 2010. Although no one knows precisely why the storms stopped, the phenomenon did coincide with a severe drought caused by an El Nino event. Nonetheless, in recent years, the Catatumbo lightning has rebounded and resumed lighting up Lake Maracaibo’s night sky.

No one really knows why the lightning persists, although theories abound.

Lake Maracaibo is found within a larger, low elevation basin surrounded by swamps, all of which sit above a massive oil field. Hand-in-glove with oil is methane, which can be seen bubbling up through the lake and the swamps.

Some familiar with the phenomenon think the methane “may increase the conductivity of the air over Catatumbo, allowing lighting to recharge faster and fire more frequently.”

Although this sounds like a good theory, it has been rejected by at least a few atmospheric scientists. These researchers claim that the concentration of methane in the atmosphere around Catatumbo is too small to produce such an effect, and they point to other areas of the world where methane concentrations are higher, but no lightning has been observed.

More experts are satisfied with the explanation that considers the unique interaction between the heat and humidity in this equatorial region, the proximity of two spines of the Andes Mountains and the wind and moisture from the Caribbean Sea.

The low Maracaibo basin is surrounded on the west, southwest and south by two mountain ranges, the Cordillera de la Costa and the Cordillera de Merida. As winds blow in from the northeast off of the Caribbean Sea, they meet moisture that has been baked off of Lake Maracaibo and its swamps by the strong equatorial sun.

This warm, humid air slams into the mountains and rises, ultimately coming into contact with the significantly colder Andean air. Thunderstorms and the magnificent lightning display are produced.