This Day in History: June 26th 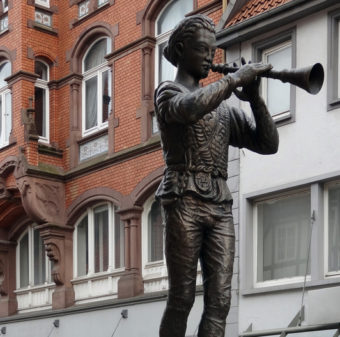 Although there are many variants of the Pied Piper story, the most familiar one is the fairy tale told by the Brothers Grimm. The basic story goes that the town of Hamelin is infested by rats, so they hire a rat catcher to come and take care of the problem. The guy’s a total weirdo dressed in multi-colored clothes who has a really strange modus operandi. After agreeing upon a fee with the townsfolk, the rat catcher coaxes the rodents from their hiding places by playing a pipe. He leads the entranced vermin to the Weser River where they willingly meet a watery death. Problem solved.

The people of Hamelin are stoked that the rats are history, but for some reason they decide to screw the rat catcher out of his fee, which proves to be a Very Bad Idea. On June 26, 1284, the Feast Day of Sts. John and Paul (nobody cares about George and Ringo apparently… ;-)) the Pied Piper comes back to town. He exacts his revenge on the cheapo citizens of Hamelin by once again playing his pipe. But this time he hypnotized all 130 children of the village who follow him out to the mountains, never to be seen again. Harsh.

So, what really happened in Hamelin? Did a piper really make off with all the kids?

It’s impossible to piece together exactly what happened because there are no contemporary sources describing the incident. There was a stained glass window placed in the Church of Hamelin in 1300 that commemorated the event, but even that was destroyed by 1600.

We’re told the window depicted a man in colorful clothing playing a pipe surrounded by children clad in white. There wasn’t a rat in sight. The piper as rat catcher didn’t enter the story until the 1550s, when various wandering rat catcher legends from all over Europe influenced the Hamelin tale. By medieval times and beyond, rat catchers were heroic figures, and rightly so considering the squalor of most contemporary towns and villages, so sinister undertones were highly unlikely.

So what’s the most likely fate of those 130 children from Hamelin? It most likely wasn’t the plague, as something like the Black Death would have stricken the adults in the town as well as the children, and spread across the area like wildfire. There’s no evidence of the Great Death, as it was known at the time, occurring in the region in 1284, and an event of such importance surely would have been recorded. The peak of the plague in Europe would not occur for another 65 years.

Some contend that the children left Hamelin to take part in a military campaign or a Children’s Crusade to the Holy Land. In this scenario, the piper would be acting as their recruiter or leader. But again, there is no contemporary record of any such event.

The theory that most scholars support is that the children may not have been actual kids but citizens of Hamelin, and the word “children” was used allegorically, or the children were older teenagers who left Hamelin willingly to colonize new villages, especially in Eastern Europe. This practice was called Ostsiedlung, and several towns and cities are believed to have been founded in this manner by young people from Hamelin during medieval times. The piper would be leading the colonists to their new settlement.

The town of Hamelin certainly agrees, as evidenced by this posing on its website:

Among the various interpretations, reference to the colonization of East Europe starting from Low Germany is the most plausible one: The ‘Children of Hameln’ would have been in those days citizens willing to emigrate being recruited by landowners to settle in Moravia, East Prussia, Pomerania or in the Teutonic Land. It is assumed that in past times all people of a town were referred to as ‘children of the town’ or ‘town children’ as is frequently done today. The ‘Legend of the children’s Exodus’ was later connected to the ‘Legend of expelling the rats’. This most certainly refers to the rat plagues being a great threat in the medieval milling town and the more or less successful professional rat catchers.

So, the bottom line is we’ll never know for sure, but the most likely explanation is pretty yawn-inducing when compared to the sinister connotations inherent in the old fairytale.