This Day in History: June 27th 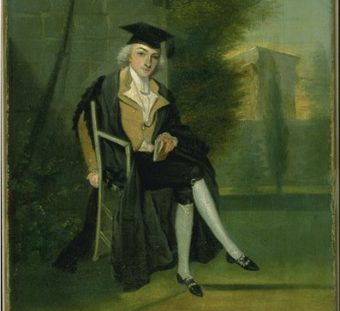 On June 27, 1829, James Smithson died in Genoa, Italy at the age of 64 after a long illness. He wrote his will three years prior to his death, which contained a strange request. He left his sizable estate, totaling roughly half a million dollars (about $11 million today), to his nephew Henry James Hungerford, but added the provision that if Hungerford died childless, the cash would go “to the United States of America, to found at Washington, under the name of the Smithsonian Institution, an establishment for the increase and diffusion of knowledge…”

The will was so noteworthy that it was published in the Times of London. Extraordinary as it was, few believed the money would ever make it to America considering Smithson’s nephew was young, in good health and in all probability would sire an heir or two.

James Smithson’ origins were as unusual as his Last Will and Testament. Born James Lewis Macie, he was the illegitimate offspring of Elizabeth Hungerford Keate Macie and Hugh Smithson, 1st Duke of Northumberland. Born in France in 1765, he became a naturalized British citizen known as James Smithson ten years later.

Smithson had a keen interest in the natural sciences, attended Oxford University, and became well-respected as a chemist and a mineralogist during chemistry’s infancy as a science. He was accepted into the Royal Society of London in 1787, only a year after his college graduation, a rare honor for someone so young.

When Smithson’s mother passed away, he was the beneficiary of a decent inheritance, and through wise investments expanded his wealth even further. He took his father’s surname and dedicated his life to scientific study until his death in 1829.

When his nephew, Henry James Hungerford, died in 1835 without leaving any heirs, it set off an eight year bickering fest in Congress over what to do with the huge bequest. Since Smithson, who had never once set foot in the U.S., hadn’t given the slightest indication of what he’d like the Institution’s function to be, narrowing it down was challenging.

Several ideas were bandied about including a school of natural history, a national observatory, a scientific institute and a national museum. Eventually a compromise of sorts was reached which took into consideration many of the suggested ideas; this led to an Act of Congress that established the Smithsonian Institution on August 10, 1846.

It remains a mystery why John Smithson would leave his entire estate to a nation that was completely foreign to him. He never discussed or wrote about the bequest or his intention for the institution in America with any of his friends or associates. All we can do is speculate on what forces motivated Smithson to provide such a generous gift to a country unknown to him.