Why Are Continental Breakfasts Called That?

June 30, 2014 Melissa
Austin asks: Why are continental breakfasts called that? 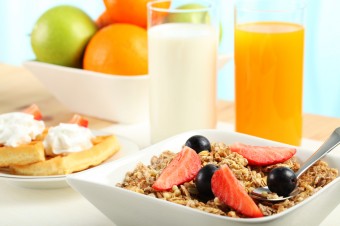 Many hotels offer guests a free breakfast consisting of muffin, coffee, cereal and milk, toast, juice, bagel, and, at some, even scrambled eggs and make-your-own waffles. Born in the Gilded Age, today’s continental breakfasts reflect the West’s transition from a mostly agrarian culture to an industrial (and today, service) society. Luckily, however, some of us have not forgotten our culinary past.

Breakfast in the Early 1800s

In the first part of the 19th century, as many rural American families had greater wealth and access to a larger variety of foods, a typical family breakfast would include a meat, eggs, fish, a bread, a cereal, fruit and any of a variety of condiments, including butter, jam and maple syrup.

Common meats throughout the states included bacon, sausage and ham. Cereal grains such as grits and oats were also popular, as were many different types of breads, including pancakes and biscuits.

A hefty intake of calories, these hearty breakfasts were a necessity for the hard-working American farm family of the first half of the 19th century.

Birth of the Continental Breakfast

Over the latter part of the 19th, and early quarter of the 20th, centuries, the West (and in particular) America increasingly became urbanized. From 1870 to 1920, the population of American cities grew from 10 million to 54 million, and many of these people were a part of the growing middle class.

While these shopkeepers, dentists, accountants and merchants may have put in long hours, they certainly weren’t exerting the same physical energy as their agrarian forebears. Needing fewer calories, the traditional American heavy breakfast eventually fell out of fashion.

Also at this time, continental Europeans were traveling the world and bringing their taste preferences with them.  This brings us to the British and the traditional British fry up. Alternately known also as the “fry,” “full English,” and even the “Full Monty,” a traditional English breakfast has both sausage and bacon, eggs, fried bread (literally, a slice of bread fried in either lard, butter or bacon fat), sliced fresh tomato and baked beans (yes, like Heinz’ baked beans). In addition, many purveyors of this Matterhorn of breakfasts also offer optional “pudding” (not JELLO, but rather a sausage made from oats and pork fat, with or without pig’s blood), kidneys (beef or lamb), kippers (smoked herring), sautéed mushrooms, and, of course, fried potatoes.

Appalled by the heavy British breakfast, the Europeans (think the French and their petit déjeuner) helped the British create a modest first meal, frequently consisting merely of coffee or tea, pastry and fruit. By 1855, this was being referred to as the continental breakfast.

Europeans were also touring America and staying in her hotels. Frequently the primary (if not only) source of meals for a tourist, American hotels soon began adjusting their fare to meet the tastes and expectations of their European customers. The American middle class (some of whom also toured Europe and were exposed to the practice over there, as well) soon also preferred the smaller meal, and, thus, the continental breakfast became an American staple.

It’s Not Just the Food

The term “continental” referred to more than just the dishes served, it also described its pricing. Traditional American hotels were more like boarding houses where meals were included in the price of a room. On the other hand, European hotels offered rooms and meals à la carte. As Europeans toured America, (and Americans toured Europe), soon hotel patrons in the U.S. were opting out of most hotel meals, although breakfast was still desired. To accommodate these changing tastes, the ‘continental’ model of room pricing, where breakfast was included with the cost of the room, came about.

Not every member of the Gilded Age was pleased with the new fad. As one sad and hungry person noted in Harper’s Weekly in 1896:

In old days a hungry man could get more things to eat . . . . Hungry men have declined in numbers and influence . . . . No one but the “Autocrat” ever talked much at [the old-style breakfast] for the viands were too tempting – great beef steaks, hot rolls, buckwheat cakes, omelettes, potatoes, coffee, and even . . . pie.

Of course, the big breakfast never really went out of style. Depending on your locale, you can still pack in a full day’s worth of eating before 10 a.m. For instance:

Served in the skillet in which the potatoes were fried, the Heap piles on two kinds of cheese, green pepper, onion, two eggs, bacon and toast. The hot sauce is served on the side.

Raising over 25% of all pork in the U.S., it should come as no surprise that Hawkeyes enjoy a tasty, breaded and deep-fried pork tenderloin first thing in the morning, especially if it’s served with gravy, a couple of eggs, home fries and a side of mini-pancakes.

Rarely seen outside of the confines of South St. Louis, the “slinger,” was born in the wee hours of the morning in one of the city’s greasy spoons. Sure to soak up whatever you’ve been drinking, the slinger smothers two eggs, a hamburger patty and hash browns in chili and cheese, often served with a side of toast, biscuit or even pancakes.