In a Transplant/Transfusion, Does the Donor’s DNA Get Integrated Into the New Host?

April 3, 2014 Melissa
Matt asks: In an organ or blood transplant/transfusion, does the donor’s DNA get kept and integrated into the new host? 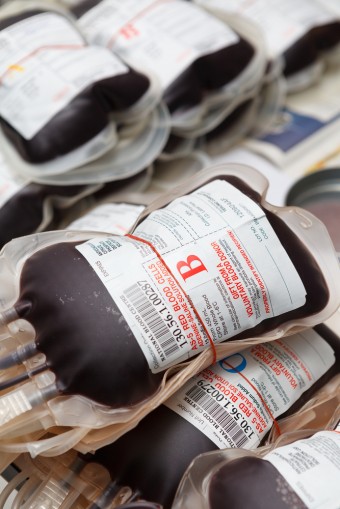 Depending on the type of donation, the DNA stays for a short time, a long while, or maybe even forever.

Scientists have known for years that a single organism can have cells that are genetically distinct. Sometimes, this occurs because two sets of fertilized eggs fuse into a single organism that retains both cell lines. This resulting chimera may:

Such as the 52 year-old woman who discovered she was a chimera when genetic testing (to find a suitable match for a kidney transplant) falsely found:

She was not the mother of two of her three biological children. It turned out that she had originated from two genomes. One genome gave rise to her blood and some of her eggs; other eggs carried a separate genome.

Other less dramatic chimeras result from the sharing of smaller amounts of genetic material. Called microchimerism, it can occur during gestation, where the resulting child retains, at least for awhile, some cells that are “genetically identical to their mothers’.” Their mothers are equally affected:

After a baby is born, it may leave some fetal cells behind in its mother’s body, where they can travel to different organs and be absorbed into those tissues. “It’s pretty likely that any woman who has been pregnant is a chimera . . . . “

Given the relative ease with which genetic material can be shared within one organism, and transferred during periods of close contact, it should come as no surprise that microchimerism can occur pursuant to blood transfusions, and organ and tissue transplantations.

After blood is donated, the major components are separated, and some experts think very little DNA is passed during transfusions:

Most of the blood donations that you think about would be packed with red blood cells . . . . You only give [in a transfusion] white cells if people are white cell deficient . . . [like] after chemotherapy. So most of the donations would not probably contain very much DNA at all.

Others disagree and note that:

Transfused blood does . . . host a significant amount of DNA-containing white blood cells, or leukocytes – around a billion cells per unit . . . . Even blood components that have been filtered to remove donor white cells can have millions of leukocytes per unit.

Miniscule amounts of genetic material [is amplified] for detection and . . . studies using PCR to amplify male genes in female recipients of transfusions from male donors have demonstrated that donor DNA endures in recipients up to seven days. And a study of female trauma patients receiving large transfusions showed the presence of donor leukocytes for up to a year and a half.

It is unclear if these trauma patients received transfusions that included white blood cells. Regardless, it must be noted that: “the recipient’s own DNA [remained dominant and] the donor’s DNA [was] a relatively inconsequential interloper.”

In a 2005 study, donor DNA was found in the recipients of certain vascular organ transplants, and the study’s authors opined that this occurred through a couple of mechanisms.

First, passenger cells that tagged along during the procedure were shed by the transplanted organ, and then:

Second, other causes including “immune rejection of the transplanted organ” caused:

Destructive changes in . . . cells. Fragments of disintegrated cellular organelles . . . [were absorbed] by recipient scavenger cells . . . . [and] some fragments were incorporated into dendritic cells [DC] and processed.

The study’s author’s concluded that:

Used to treat conditions like aplastic anemia, leukemia, immune deficiencies, and lymphoma, a bone marrow transplant happens pretty much like it sounds:

A doctor first destroys a patient’s blood cells or bone marrow . . . often done with chemotherapy or radiation. The doctor then puts in new bone marrow from a matched donor . . . .

Prior to these “high-dose chemotherapy or radiation treatments,” bone marrow stem cells may be removed from the recipient (autologous bone marrow). Otherwise, it is obtained from a well-matched donor (allogenic bone marrow) or taken from the umbilical cord of a newborn (umbilical cord blood).

After the treatments, stem cells are transplanted intravenously in a process called hematopoietic [blood making] stem cell transplantation (HSCT). Since blood cells are produced in the bone marrow, the blood of a recipient of an allogenic bone marrow transplant will have the donor’s DNA. This condition has produced some unintended consequences, such as false identification.

For example, in 2005, an investigation into a sexual assault produced a positive match with a person who could not possibly have committed the assault since he was incarcerated at the time of the attack. Eventually, the investigators realized:

Research conducted in 2007 revealed that bone marrow donor DNA could migrate even further and later turn up in cells that had nothing to do with making blood:

In 9 of 21 cases, donor-derived [DNA] were detected in [recipient] DNA samples of fingernails that shared from 8.9% and 72.9% of total peak areas . . . . [This] stable contribution of donor-derived DNA in nails suggested the existence of donor-derived cells in the stem-cell system of nails.

Likewise, in a 2008 study researchers found that:

The presence of donor DNA in epithelial cells is remarkable, in no small part due to the fact that these cells are the most prolific in the human body. In fact, epithelial cells are found lining the body’s cavities and most of its organs, covering its flat surfaces, in its ducts and glands, and comprising its skin. Recently some scientists have opined that the migration of donor DNA may have long-term, lasting ill-effects:

The incorporation of the foreign DNA into the host genome could result in physical rearrangements at the site of integration, including point mutations, deletions, interruptions of coding sequences and chromosomal breakages. This “inappropriate” illegitimate integration of donor DNA in epithelial cells after allogeneic HCT may [result in] . . . genomic instability in the epithelium and may have implications in the development of secondary cancers.