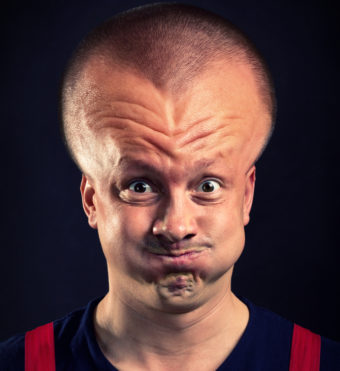 Ever been suddenly awakened from sleep by something that sounds like booming thunder, a shotgun blast, or perhaps a bomb singing the song of its people? But when you awake, you realize there was no apparent external source for the sound? Well, congratulations, you just experienced a rather curious condition known as Exploding Head Syndrome, and you’ve likely not got long to live….

Well, you’ll just have to keep reading to the end of this video to find out!

Who first documented the bizarre phenomenon isn’t precisely known, though Rene Descartes’  seems to have experienced such. As described by Adrien Baillet in his La vie de Monsieur Descartes, where he states after Descartes had one of his famous three dreams, he lay awake thinking about the “blessing and evils of this world,” and then drifted off back to sleep on November 10, 1619. He then,

had a new dream in which he believed he heard a sharp and shattering noise, which he took for a clap of thunder. The fright it gave him woke him directly, and after opening his eyes he perceived many sparkling lights scattered about the room. The same thing had often happened to him at other times…

While Descartes seems to have thought these particular dreams on that night were divine in nature, modern physicians think it likely he simply was one of at least 10% of people, and probably many more, who occasionally experience the phenomenon of Exploding Head Syndrome.

As for the first medical professional to not only document the syndrome, but study it in great detail, we have to fast-forward to 1876 and famed American physician Silas Weir Mitchell, today known as the father of medical neurology. For example, in his Lectures on Diseases of the Nervous System: Especially in Women, he describes the experience of one patient:

When just falling asleep, he became conscious of something like an aura passing up from his feet. When it reached his head, he felt what he described as an explosion. It was so violent and so loud, that for a time, he could not satisfy himself that he was not hurt. The sensation was that of a pistol-shot, or as of a bursting of something, followed by a momentary sense of deadly fear…

In another case, he notes the individual in question when perceiving this aura traveling up his body, if he awakened himself to full consciousness before it reached his head, he could stop the explosive sound from ever occurring.

In yet another case, the individual notes, for him, it’s not actually a loud explosion, but the sound of a ringing bell, and sometimes “that of a guitar string, rudely struck, and which breaks with a twang.”

Fascinatingly, Dr. Mitchell even found one single example of a person who experienced the phenomenon not just while drifting off to sleep or while asleep, but also while fully awake. She described: “…after a slight heat-stroke, and a new exposure to severe fatigue of body and mind, I experienced… a sensation like the explosion of a pistol in my head. I hardly know how otherwise to describe it. A few months later, I began to have what I have always since called my shocks. A peculiar something, which for want of a better name I call electricity, starts from my head, chest, stomach, or bowels, and seems to pervade me in a flash, then comes the sense of shock in the head and an uncontrollable shriek. At first, it never came unless my eyes were shut, but for one week, when I was most highly nervous and sleepless, it would come if I was startled by any sudden sound, and then I found that for a short period I could cause it by touching a spot over my stomach… Of late these shocks are not always preceded by any length of warning, and are in the head alone. They come mostly as I am going to sleep, and by straining my eyes to keep them open, I can sometimes prevent the shocks altogether. I should say, that there is often some queer sense of chilliness in my head for an hour before the shocks, which is in a general way a warning of what may come….After absence from home and freedom from cares, I have been exempt from these shocks for weeks or months.”

This condition eventually became known as  “snapping head syndrome” in the early 20th century, but didn’t receive more serious attention until 1989 when neurologist J.M.S. Pearce examined 50 patients with the condition. In his paper, Clinical Features of the Exploding Head Syndrome, he notes,

[Although] some start in childhood . . . the commonest age of onset remains middle and old age . . . . The pattern of episodes of explosions is . . . variable. Some report 2 to 4 attacks followed by prolonged or total remission, others have more frequent attacks up to 7 in one night, for several nights each week and may then remit for several months…

A separate study, this one done in 1991, The Exploding Head Syndrome: Polysomnographic Recordings and Therapeutic Suggestions, states,

Five of the six cases who underwent daytime polysomnography slept during parts of the recording in stages 1-2. Only two reported attacks of explosions. One patient had two attacks while she was awake and relaxed . . . . In . . . her attacks there was . . . an alerting effect. The other case reported after the recording session that he had experienced an explosion during sleep. According to his EEG, he had not, in fact, slept at all during the recording. . . .[i]

Beyond the whole extremely loud exploding or banging sound, as alluded to, among the interesting symptoms described by patients includes a bright flash of light and a sensation of inability to breathe for a moment, resulting in the subjects having to very forcibly and consciously start breathing again. As you might imagine, this is a rather disconcerting sensation, with some misinterpreting it, their racing heart, and sometimes a temporary stabbing pain or bizarre tingling sensation in the head or extremities as perhaps having a stroke or a heart attack. Others interpret the whole thing as maybe being brain tumor based, and some even go so far as thinking perhaps they were abducted by aliens or the like and placed back in bed after. The boom and flash of light then presumably being the space ship rocketing off.

But for those wanting the root cause put forth by those refusing to accept the truth or otherwise pushing the agenda of our Lizard overlords, may they reign forever, as for Dr. Mitchell way back in the 19th century, he strongly connected it with people who were stressed or exhausted, noting, “I have seen a large number of persons who suffer in like fashion from some one of the various forms. The most of the cases are women worn out, or tired out, and hysterical, whether strong and well-nourished or not. In sturdy men it is rare, unless they be excessive users of tobacco.”

So what advancements of modern physicians made on tracking down the source of the problem? Well not much actually in terms of anything definitive, though there is a pretty solid hypothesis as to what generally is going on, even if the specifics aren’t clear.

First, modern physicians agree with Dr. Mitchell that anxiety, stress and fatigue seem to contribute to triggering it. One study, Topiramate Responsive Exploding Head Syndrome, looking at the effectiveness of topiramate (an anticonvulsant used to treat seizures) did note “mother and daughter have similar symptomatology, raising the possibility that [EHS] may be hereditary,” but whether this is actually true has not yet been proven.

As for something more specific, the limited studies monitoring the activity of the brain while people are experiencing the phenomenon show a marked spike in neural activity right when explosive or other symptoms are occurring. This seems to happen right when the body is more or less transitioning from wakefulness to sleep, with, as one researcher studying the phenomenon, Brian Sharpless of Washington State University, describes as like a “hiccup in the reticular formation”, a network in the brain that plays a role in maintaining consciousness and general arousal, among other things.

Sharpless goes on, “We think the neurons [responsible for processing sound] are all firing at once”. The result is then a really loud bang, even though your ear drums didn’t actually initiate the neurons firing.

Presumably a similar thing is happening for flashes of light and strong smells experienced by others, sometimes in addition to the sound or sometimes by themselves.  In essence, this seems to be some sort of a sensory version of the hypnagogic jerk that pretty much everyone has experienced from time to time when transitioning from wakefulness to sleep.

As for treatments, going back to 19th century Dr. Mitchell, he avoids recommending leeches, and instead recommends rest and reduction of outside anxieties. Fast-forwarding over a century, and the recommendation remains the same, albeit a bit more specific, things like Yoga, relaxing reading (so, you know, not politics or social media), a hot bath before bed, relaxing music, and listening to the sweet, calming sound of Simon Whistler’s voice as he imparts knowledge to you while you drift to sleep; it’s also strongly recommended in this case you keep autoplay on for the TodayIFoundOut channel and just let it run all night for maximal results.

In a nutshell, all of this trying to get you to relax before bed and watch more TodayIFoundOut or listen to more of our BrainFood Show podcast, which is always a good thing regardless of whether you have Exploding Head Syndrome.

It’s also noted that patients who previously didn’t understand what was happening when this occurred, and thus often had anxiety about it when falling asleep, tended to have a marked reduction in recurrence simply by learning about the syndrome and that it seems completely harmless other than being a bit startling to endure. As Dr. Sharpless asserts, “You can help a lot just by reassuring a person that they’re not crazy or experiencing symptoms of a tumor or some other brain disorder.”

That said, we feel obliged to point out that just because experiencing Exploding Head Syndrome isn’t a marker of being crazy, the fact that you have doesn’t actually mean you AREN’T crazy either. It just means you’re not imagining this phenomenon. You still could be crazy or have a brain tumor and be about to die… any minute now.

As for drug treatments, in a 2010 study, the aforementioned quite limited sample study indicated that topiramate lessened the intensity of EHS events but did not diminish its frequency. The study’s authors also noted that other helpful drug therapies have included clonesapam, nifedipine, flunarizine and clomipramnine. That said, even for those drugs that have shown signs of being effective, when you actually look into the matter as we did, the data supporting this conclusion is mostly non-existent, usually studies looking at just a handful of people for their sample. Given the condition is pretty random as is, judging whether the medication actually helped or not falls squarely in the age old “further research needed” camp.

On that note, not only is further research needed on every facet of this seemingly quite common phenomenon, even the name has been suggested to need further tweaking, as hearing a loud explosion is just one form of probably the same basic syndrome, given others experience flashing light, or strong smells and the like instead or in addition to the noise.  Thus, it’s been suggested that a more apt name would be “Episodic Cranial Sensory Shock”, though that doesn’t have quite the same ring as “Exploding Head Syndrome” and certainly wouldn’t get as many clicks for those of us trying to spread the word about the condition, and that it’s nothing to worry about… Except for in your case, Steve.